Humanoids and an Ape 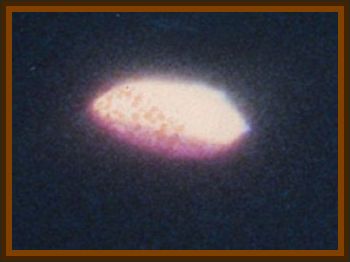 A man and a woman in a parked car on the Canourgue road, Mairieux, noticed a white metallic looking hemispherical object some 50' wide in the snow covered fields, 300' away.

Presently a dark opening appeared in this, from which 6 beings, of 3 different kinds, emerged.

They had protruding eyes with conspicuous whites, holes for a nose, narrow mouths, and bulging cheeks, their arms were long. They were dressed in tight one piece suits of metallic appearance. Each carried a dark box 6” on a side whose upper surface bore a round white luminous screen.

They walked slowly, with stiff small steps, and fanned out as if searching for something. Gradually they approached the road, until within 50' of the witnesses. Behind them, nearer to the hemisphere, stood 2 human figures about 6½' tall, with light complexions and blonde shoulder length hair, likewise dressed in tight fitting one piece metallic suits, closest to the door stood a squat figure, with long dangling arms, apparently covered with dark fur, resembling a bear or great ape.

When after about 10 minutes the small beings began to approach the car, the young woman became frightened and jumped out, slamming the door, and ran back to her own car which stood close by. At this, the man saw all the figures stood still, then the animal reentered the object, followed quickly by the 2 humans and then the 3 humanoids, which ran back with such long, swift strides that they looked as if they were flying over the ground. The dark opening disappeared, and the UFO took on a brilliant metallic color, and rose vertically for 30', then shot off westwards, becoming successively orange luminous, bluish, and reddish before dwindling to a point.

This all happened with such speed that the young woman observed only the recession of the luminous object. The witnesses did not seek for traces in the snow. However, strange tracks in the snow were found later that morning by a Mrs. Michel and her children in the garden of their house in Maubeuge, 1.1 mile away, implying a connection.