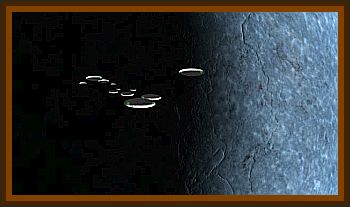 A fleet of spheres was recorded over Madrid, Spain.

The witness, identifying herself only as Fortuna, mentioned that she was taking a walk in Madrid’s northwestern section, photographing the landscape and some of the contrails left by passing airliners.

The sun was behind me and I was looking north. I saw an airliner go by and then I saw a group of elongated things coming in from the East. At first I thought the airliner itself had ejected something, but then I concentrated my gaze on them and forgot about the aircraft.

I had the sensation that they, the unknown objects, were elongated objects flying in formation. There was a large number of them and I thought they could be birds, only to realize that this was not the case, they were small brillant spheres that blinked and flew in 2 separate groups, heading west.

They were not flying in a straight line, only making very small movements. I was stunned. It all took place very quickly, no more than a minute elapsed from the moment I saw them until I stopped seeing them.

Both groups traveled swiftly and at a near distance, it could be clearly seen that they flew together.

Such flocks of UFOs have been seen and recorded by Miss Rosa, a.k.a. Fortuna, and Casio, from Pozuelo de Alarcon, near Madrid, at least 7 times during the month of January, while the rest of the people in this densely populated area are unaware of anything uncommon.

Experts in ornithology affirm this lady is just filming flocks of sea gulls, of which there is a large population in the area.