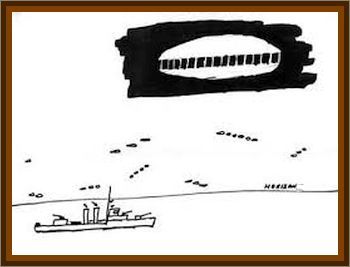 MacFarlane's ship the HMCS Iroquois (DDG 280) was considered to be a pocket cruiser. She entered service on November 30, 1942 and served with distinction during the Second World War. When war broke out in Korea, the Iroquois was refitted for antisubmarine warfare. The Iroquois first arrived in Korea in June of 1952, where it completed three tours of duty before returning to Canada in December of 1954. Four of the Iroquois ship's company were killed and ten were wounded. These young men were to be the only Canadian naval casualties of the conflict.

At the time of the sighting, MacFarlane had the rank of Lieutenant.

This is an account of a sighting of flying saucers that I saw when travelling from Pearl Harbor, HI to Guam in the Canadian Destroyer H.M.C.S. Iroquois in May 1952.

The ship left Pearl Harbor around 6:00 p.m., and proceeded on a westerly course at about 14 knots. I was the Officer of the watch on the bridge, having taken over the watch at midnight. The ship was in three watches and proceeding under normal routine conditions. There was a thin layer of mist overhead, the stars were not visible. The temperature was warm and there was no wind.

At about 1:00 a.m., I saw a single white light on the port bow at about 30° elevation at a visual estimated range of about a mile. It moved from right to left at a rapid rate. It had a halo around it due to the mist. I assumed it to be a low flying aircraft. It did not appear on the Sperry Navigational radar. The air defence radar was not in service due to a major maintenance routine. I thought it unusual to see a low flying aircraft which at this time was about 100 miles from Hawaii. There were no military aircraft listed on the operational schedule for this area.

A short time later another light appeared from the same direction, passing at high speed. It was not picked up on the navigational radar either, which was not surprising as the radar detection lobe covers the surface but not the sky. By now the mist had dissipated and the sky was clear.

These two incidents were not similar to subsequent sightings. They are recorded only to give a complete picture of events.

At about 2:00 a.m. I saw the first of many strange lights in the sky. The vast majority were in formation, usually quarter line, and all appeared on the port side, toward the south. Many were in groups of three, some in groups of five or six. They appeared and disappeared instantly, at the same speed a computer screen operates.

They moved from time to time and the numbers changed frequently. At one time I counted more than thirty. I recall discussing the possible identity of these lighted objects with the signalman on watch with me. He thought they were very strange .

Suddenly one of these objects appeared at close range on our port bow at a low elevation. It was disk shaped and consisted of a very bright light with black windows running around the whole side which was visible to us. It maintained perfect station on us for at least fifteen minutes. I scanned the object with binoculars attempting to see into the windows but saw nothing. I counted the windows and recall there were about two dozen. They were very large and close together and completely black. Although the body of the object glowed very brightly, it did not prevent me from looking directly at it. The object appeared more oval in shape than round.

And then suddenly it was gone. There was no sound made at any time. There were still some objects visible far off on the port side. They also had disappeared by 3:00 a.m.

It was at this time that I realised that I hadn't informed the captain nor anyone else. I did not debrief any of the watch who were at other stations. It was conduct so unlike my usual practice that I was left quite disturbed.

It must also be remembered that in 1952 there were a multitude of sightings of flying saucers, so many in fact that many doubted the truth of such sightings. A young naval officer certainly didn't want to be included with that group.

The problem then was what to enter in the ship's log. I decided to state that many meteorites had been sighted during the watch. At 4:00 a.m. I turned the watch over to Lieutenant Doug Tutte without mentioning the flying objects. He did not read the ship's log until he wrote up the record of his watch at 8:00 a.m.

We met at breakfast. He said that I hadn't mentioned seeing meteorites on the turnover and wanted to know what they looked like. Eventually he described a similar experience and we discussed the subject at length. He also had failed to call the captain, and for similar reasons he also reported sighting many meteorites during the watch in the log.

Lieutenant Tutte was a very reliable and professional officer, and yet he couldn't explain why he also did not call the captain. After some considerable discussion we concluded that there was a possibility that we were under some sort of hypnotic control from the objects. We didn't want to be the subject of ridicule and, fearing the reaction of the captain, we agreed to say no more about the night's activities.

It was very weird.

None of these lights had been reported by the lookouts whom, when challenged, all replied that their sector was clear except for those funny lights. They had not reported them because they were neither ships nor aircraft. These groups of lights were visible as far as the horizon on the port side. We were on our way to fight a war in Korea.

I have forgotten the names of the signalman and lookouts on that strange night and I believe that Doug Tutte is now dead, so there is no proof that I have of the events that I described. The ship's log will be in the National Archives, which will confirm the dates of the Meteorite Sightings.

Why have I written this account at this late date? A feeling of guilt or a sense of duty? Probably because I think it is important that it be recorded, and that I am now old enough not to worry about being ridiculed.

Finally, I have never seen any flying objects since. It must be noted that they acted in a non threatening manner. I presume that they were just inquisitive.