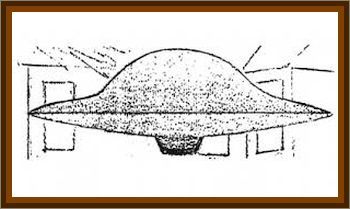 A close range sighting of a domed UFO observed by William Angelos, 20, a technical school student.

Angelos said that while watching television at 11:10 p.m., he heard a loud & throbbing noise, similar to a rough running piston engine, immediately outside his family's apartment on Henry Street. His mother, who had just retired, also heard the noise.

Angelos immediately rushed to the door of their apartment, which was located on the ground floor. Looking out into the courtyard between three apartment buildings, he first noticed a red light above the parking lot in the courtyard. He then saw that the red light was on the underside of a large, solid, almost colorless object hardly more than 20' away.

The object was shaped like a disk, oriented in a horizontal position, flat on the bottom and with a domed upper surface. When first noticed, the domed disk was approximately 12' above the pavement, so that it was seen against the wall of the building on the opposite side of the courtyard. It ascended slowly in a nearly vertical climb toward the west southwest and disappeared in the night sky at an elevation of 45°, after a duration of at least a minute.

It was discovered that several other neighbors had heard the loud sound. At least one had seen the red light flashing through her window at approximately the same time Angelos reported seeing the disk ascending. Other neighbors reported having experienced television interference at the same time.