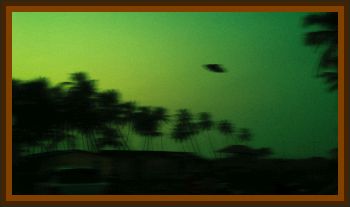 On a July or August summer evening in Dedham, MA, my 8 year old brother spotted a cream white oval traveling toward our home flying low over the tree line along Route 1. I was 10.

My mother ran outside and waved her arms hoping they would see her signal. They did.

We lived on Clough Rd, a cul de sac of town houses inhabited by several FBI families, a priest who lived next door to us, Governor Volpe’s brother and the rest mostly made up of professional type families. At the end of the road was the Clough’s big white farm house with stately trees dotting the land.

On the first evening, the UFO hovered above one of these trees approximately 100' to 500' above us. It shot straight up about 1:00 a.m.. It was a brightly illuminated oval with colored lights circling beneath.

We think we saw what appeared to be windows, as well.

The second evening scenario was a repeat. My mother called the Blue Hills Observatory in Canton, MA. About 11:30 p.m. on the second evening, 2 Navy jets flew one above and one below the UFO, it had shot up a little upon their approach. They flew off and repeated the maneuver flying by in the opposite direction.

On their third approach back, the UFO shot straight up and we watched until it disappeared from sight.

The Navy would not respond to my mother’s follow up calls and asked her to stop calling.

The event was witnessed by over 30 people the first night and many more the second night. There were a few, including my mother’s best friend who became hysterical. Everyone else was in awe.

This event has shaped my beliefs through out my life. I am 52 now, and this is the first time I am reporting the event myself.