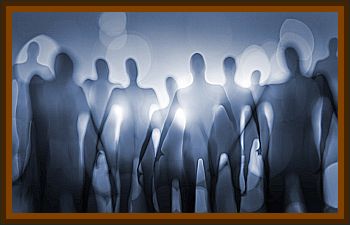 Harold Carpenter, an employee at a local state, over a period of several weeks had kept hearing a very loud, deep humming noise, which lasted for about 2 or 3 minutes.

The noise always seemed to occur between 4:00 a.m. and 5:00 a.m. One morning, very curious, Carpenter rose from his bed, quickly got dressed and quietly stepped outdoors. With the humming noise still audible, and seeming to emanate from the southwest, Harold set off to walk to a wooded area known locally as Sunny Calvert.

Determined to track down the source of the humming noise, and having come this far Harold clambered down a deep slope to where the sound seemed to be coming from. Harold peered down and was shocked to see a strange looking device.

It resembled a mushroom without a stem. The object was gray in color and seemed to be hovering about 8' to 10' above the ground. Harold came to a vantage point amongst the trees where he could actually see the underside of the craft. It was definitely hovering above the ground. It was about 15' to 20' in diameter across the base, which housed what looked like a lip on the inside bottom.

Even more startling was the sight of up to 5 peculiar looking beings gathered underneath the craft on the surface below. The beings were about 4' to 5' tall, and carrying what looked like pound jam jars with a handle in one hand and an implement resembling a pair of tweezers in the other.

The beings used these to pick up bits of twigs and leaves before placing them in the clear glass looking jars. As the beings wandered around picking up various samples, all kept very close to the craft, which hovered silently above.

The humming sound had now stopped. All wore the same 1 piece gray, flexible looking suits that stretched over their feet. It also covered their heads much like a Balaclava. Their faces were exposed and Harold could see that these were human like but totally expressionless, with normal human like eyes. If they had any ears, the 1 piece suit hid them from view. They had a snout like nose, resembling that of a pig. Their mouths were similar to humans, and so were their hands, until Harold noticed they didn’t appear to have thumbs.

While observing in fascination, Harold had inched closer and closer, until he realized that he was only to within 10' of the craft. At this moment one of the beings looked up and with the same expressionless face, stared directly at him.

Without so much as a sound or movement, it somehow alerted the others to Harold’s presence, for the rest stopped what they were doing and slowly began to retreat to the craft, which had descended to hover barely 2' of the ground. One by one the beings disappeared underneath the craft by means of its lip. The craft then began to rise, at which point Harold saw one of the beings climb through a type of gate housed on the inside of the lip which then closed. The craft slowly continued to climb, moving slightly to one side towards a clearing among the trees.

It gradually gained altitude and speed. It emitted a flash oflight and departed at incredible speed.