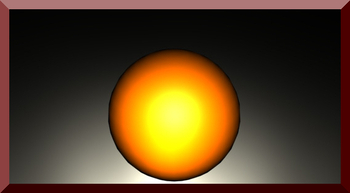 I was having lunch at my parent’s on Sunday August 1st 2004. We had just finished our meal and it was around 3:00 p.m.. It was a really nice day. The sky was clear, without any clouds.

Our village is located at a crosspoint for several very busy airplane corridors so I often see planes fly by. I was watching an aircraft as it was flying very high when I noticed an orange sphere.

It was stationary in the sky and it was changing colors, from orange to red, sometimes to white. It looked like it was blinking. I went inside to fetch my binoculars and I observed it for a good minute.

The sphere then moved slowly towards the south east. Sometimes it disappeared then reappeared. Then it moved slightly upward towards the north west, always changing colors, from orange to red. Then the sphere disappeared.

I don’t know if it went away at great speed like it’s often mentioned in UFO reports, or if it just became invisible. My father observed it too. I don’t know yet if the SOBEPS heard of this event or if this thing was detected by some radars. Since then I’ve been watching the sky in case I can see it again.

Personally I think we’re not alone in the Universe. Our development as humans is still in the early stages and there is a lot of concepts we can’t grasp. I am of an inquisitive nature and I would really like to know if beings from other planets are visiting us or know about us.