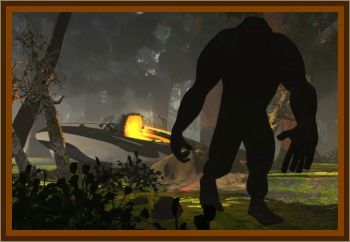 A distinct humanoid sighting occurred in Finland in the summer of 1965 in the small town of Luumaki.

One particular afternoon, the Kuningas family were picking blueberries in the thick woodland. Parents Matti & Maria, and their two children Tapani & Teuvo were the only ones in the area.

It was a little after noon, and with the entire area to themselves, they decided to spread out so that they could pick as much fruit as possible before heading home.

As the family were doing so, Matti began to hear a strange bubbling sound coming from above. Although it took him several moments, a scan of his surroundings revealed a man like figure positioned on a rocky slope above and to the front of him.

The figure looked at Matti intently for several moments before it started out in his direction. It was around 3’ 3" tall and of a particularly strong and robust build, with thick, orange skin.

Matti watched the creature getting closer and closer, rooted to the spot, his legs refusing to respond to his desire to flee. Once the strange beast man was only yards away from him, however, it simply vanished into thin air.

Matti spun around, surveying the woodland around him. The creature, though, was nowhere to be seen. The youngest Kuningas child, Teuvo, would later state to his parents when Matti was telling them of the incident that he had seen the creature approaching his father from the other side of the field. He also saw it simply disappear into nothing.