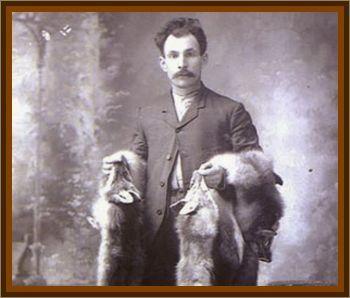 Mr. James Lumley, an old Rocky Mountain trapper, who has been stopping at the Everett House for several days, makes a most remarkable statement to us, and one which, if authenticated, will produce the greatest excitement in the scientific world.

Mr. Lumley states that about the middle of last September, he was engaged in trapping in the mountains about 75 - 100 miles above the Great Falls of the Upper Missouri, and in the neighborhood of what is known as Cadotte Pass. Just after sunset one evening, he beheld a bright luminous body in the heavens, which moved with great rapidity in an easterly direction. It was plainly visible for at least five seconds, when it suddenly separated into particles, resembling, as Mr. Lumley describes it, the bursting of a sky-rocket in the air. A few minutes later, he heard a heavy explosion, which jarred the earth very perceptibly, and this was shortly after followed by a rushing sound, like a tornado sweeping through the forest. A strong wind sprang up about the same time, but suddenly subsided. The air was also filled with a peculiar odor of a sulphurous character.

These incidents would have made a slight impression on the mind of Mr. Lumley, but for the fact that on the ensuing day he discovered, at the distance of about two miles from his camping place, that, as far as he could see in either direction a path had been cut through the forest, several rods wide, giant trees uprooted or broken off near the ground, the tops of hills shaved off and the earth plowed up in many places. Great and widespread havoc was everywhere visible. Following up this track of desolation, he soon ascertained the cause of it in the shape of an immense stone driven into the side of a mountain. An examination of this stone, or so much of it as was visible, showed that it was divided into compartments that in various places it was carved with curious hieroglyphics. More than this, Mr. Lumley also discovered fragments of a substance resembling glass, and here and there dark stains, as though caused by a liquid. He is confident that the hieroglyphics are the work of human hands, and that the stone itself, although but a fragment of an immense body, must have been used for some purpose by animated beings.