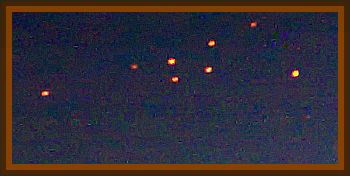 A host of silent, orange lights with consistent luminosity were observed as they travelled faster than a commercial aeroplane over Tierpoort near Pretoria, some 20 objects, and Krugersdorp respectively.

On June 15, 7 of these objects were observed and some photographed as they crossed the sky in single file over Tierpoort.

At 8:00 p.m. on October 30, 2011, a Mr. Van Greuning photographed 2 of the 5 silent fireballs which he observed traveling southwards in low cloud near the town of Harrismith.