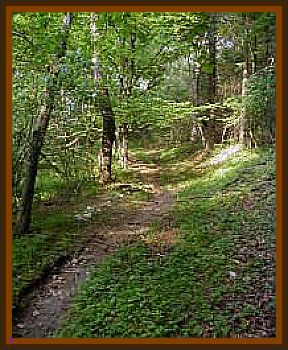 In southern Indiana there is an area which some researchers of the paranormal claim is a focal point for paranormal activity, and as such the area known as Lucky Point has become a focal point of investigations by members of the Unexplained Phenomena Research Organization.

The swampy wooded area is located in rural Knox County near the town of Monroe City. According to some, strange occurrences have happened there over the years.

The Unexplained Phenomena Research Organization, U.P.R.O., is a national group dedicated to investigating unexplained supernatural mysteries. The Indiana chapter of the group is headed by Jerry Sievers out of his home in Vincennes, IN.

We have had reports of things from UFOs, Sasquatch sightings, spook lights and ghosts in this area, Sievers commented.

One prominent mystery involves two utility poles buried in concrete, which some witnesses have claimed to observe shaking. Sievers said the poles seem to make a rattling sound sometimes. Additionally the ground has been reported as shaking at a rate of 50' an hour.

They are two sets of double poles buried in concrete with a road running between them, Sievers said. People up at Lucky Point watching for UFOs have reported hearing the poles rattle.

REMC, the utility company responsible for maintaining the poles, has denied there is any problem with the poles.

Sievers claims company representatives know about the poles, but have told him they cannot determine the reason for the rattling poles.

Another problem which Sievers says accompanies the rattling is that such items as camcorders mysteriously stop working in the area of the poles.

Sievers said it can take five visits to Lucky Point before one is able to hear the mysterious rattling noise.

Witnesses who have heard the noise and reported it to us have said it could not be the electricity. Sometimes the vibrations are so extreme that the insulators holding the wire will jar and rattle, Jerry said.

Sievers said that in the 1980s a researcher said the underground sound was caused by magnetic activity. He added a geologist discounted that theory.

Fellow U.P.R.P. member Sharon Smith said she believes there is something very spooky about the Lucky Point area. Smith says she is sensitive to supernatural activities, and can sense the presence of spirits. Sharon added that even her own son could sense something was there.

My son and I were both out there one day, we both sensed something else was there, the hair on the back of my neck stood up. He started into the woods, but turned back.

It is Smith's belief that the area is protected by the spirits of the Native Americans who used to live on the land. The Lucky Point area might at one time have been a burial ground.

I believe everyone has psychic powers which can act as windows and doorways into other places, Smith said.

The area first started to become popular for UFO watchers in the 1970s, and continues to be a popular gathering spot,

Sievers said. Lots of people have offered up different explanations for the mysterious activities, some of which Sievers himself has a hard time believing.

Some psychics have claimed there is an underground hanger for outer space ships in the area, but there is no proof, Smith said.

That will have to be proven to me, but there has been a lot of speculation about it, Jerry said.

Added in with the mysterious noise and spirits are many sightings of UFOs, which is what Lucky Point is primarily noted for.

Ufologists of the local group UPRO recorded that on November 1, 1980, at about 9:00 p.m. at Lucky Point, a deputy sheriff on routine patrol stopped to stretch his legs, and was standing next to his car looking over it, when he noticed an object he described as a black triangle about 200' away, tilted at an angle.

The craft was about 100' on a side and had large windows through which 5 humanoid figures were visible from the waist up. These figures had large heads, thin necks, and slim bodies. They were seen in silhouette, so no other features could be distinguished.

While the deputy watched them in amazement, he received what he described as a telepathic communication:

Why do you hate Iranians?

He thought to himself that he does not hate anyone.

Then, a figure on each end turned toward the center and faced the other three figures. As they did the object took off and was out of sight in seconds.

There is a similar on The Night Sky about Lucky Point that is available HERE.