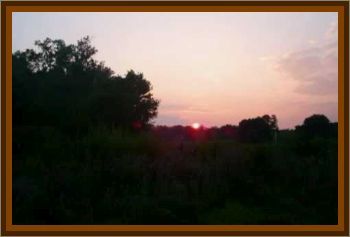 In southwest Indiana, near Vincennes, a patch of land near a rural stretch of White River, known as Lucky Point, has purportedly been the site of unexplained phenomena for several decades.

In one case, a farmer claimed to have seen an orange ball of light hovering over his cattle pen and, the next day, found a calf whose brain had been removed from a precise, egg shaped incision.

In other account, a sheriff’s deputy had stopped his car in the area and seen a large black triangle, 100' on a side, with beings looking out of the craft’s windows.

In 1986, the Vincennes Sun-Commercial, citing then, MUFON Indiana assistant state director Jerry Sievers, reported that there had been nearly 100 UFO sightings there in the past 10 to 15 years.

What I've read about the latest Lucky Point sighting seems extremely like what my husband and I experienced in 2001. The only difference as I see it, is that we video taped it. I am sure I reported it before, but we still have the video. Brian Vike Canada, extracted some still shots from our video. Whatever it was, it approached us and it did act as if it were going to land several times. It would come close to us, then go back up into the sky, and then repeat the process. At one point it was so close, and so bright that it blinded my husband briefly, and even blinded my video camera. Also, there was a response from local wildlife as this thing showed up. Frogs were chirping, as were the crickets etc, but when it arrived, all wild life went absolutely silent. The object took off at incredible speeds and angles when a small plane came flying over the area. The whole thing lasted maybe two minutes but is unforgettable to us. Some comments we've received: Russian debris? No, this was no Russian debris, and I bet what those folks saw wasn't either. Russian debris holds no intelligence, this did as it interacted with us. What strikes me the most, is even though you cannot tell it from the still shot, the object we saw and interacted with, seems similar to what everyone witnessed on December 12, 2006. In our video, you can tell frame by frame that it is a disk, with rotation underneath and a few frames in you see more lights appear around the disk. In the still shot it looks much like a ball of energy, but I can assure you it had intelligence and was much more than that. It is indeed not the only time we have experienced strange things out there, but it is the only time I talk about it because we have proof.

On Decemer 12, 2006, investigator Kerry Teverbaugh, who lives in the area, received 10 calls in the span of a half an hour, from witnesses who, according to his statement, claimed to have seen a domed disk, dark in color with three large orange lights along the edge in a triangle configuration. Other witnesses added that it was larger than a shoe box at arms length.

First seen descending rapidly, then hovering at or on the ground behind a double row of trees. No animal reaction, no electrical interference, no physical or psychological reactions before, during, or after the event, which lasted for several minutes. Pikes County Sheriffs office dispatched a cruiser, one witness stated she saw it from several miles away.

My friend and I took a drive and remarked how clear the skies were. We were in Washington, driving west when we witness two orange balls, one larger than the other, at 7:05 p.m. These objects were moving and appeared to be very near the Monroe City area, Lucky point is located about three miles to the southeast. I quickly found Venus which was evident and about to set, these orange balls were not Venus. Each orange ball quickly disappeared and not at the same time.

We were traveling west on a country road and saw them reappear in a different location. One orange ball was larger and quickly disappeared. When it did, I noticed a twinkling at the location it disappeared from. My friend and I noticed about 4 to 6 other twinkling objects, which were moving.

From then on we observed frequent, 5 to 7 minutes, of orange balls appearing and disappearing at approximately 15 to 20° up from the horizon. During this time you could see the same twinkling after some of the sightings.

Over the next 3 to 5 minutes we observed a series of appear/disappear events with up to three orange balls, some very close to the ground, three ball drawing linked. I then notice an orange ball, low to the horizon move straight up, bob up and down then disappear. Two or three minutes passed and we saw the large ball appear followed by 4 more in a semi-circle line and another ball appearing (six at the same time); drawing linked.

At this point we called Indiana MUFON, approximately 7:20 p.m. At approximately 7:25p.m. we observed one more orange ball appear/disappear much further south, South of Monroe City 3 miles, which was very low in the horizon. Our last observation was one of the twinkling objects which passed directly over our heads approximately 1000' at 7:28 p.m.

We could not discern a sound and the object had one red light and a swirling strobe, swirling around in a circle. The strobe was very odd and we both commented how un-airplane like, the strobe was. We could not clearly make out the shape of the object.

The object was traveling north. We waited several minutes longer and did not see any more activity. We observed orange balls at least 18 to 20 times over the 25 minutes. Sometimes the balls were stationary, some times they were moving. The largest gap in time between sightings was 4 to 5 minutes. One time a smaller orange ball seemed to be rotating around a larger orange ball before both disappeared.

Our conclusion was that we were witnessing a UFO incident. Each time we observed a new orange ball we shouted there it is, there's another one. We tried to reason away these objects as flares, meteors and airplanes. The orange balls varied in orange intensity. Each observation was different from the previous observation in movement and location. We did not believe they were flares due to the multiple locations, across the horizon, which we viewed these objects and the twinkling after some of the post-disappearance observations. There were no trailing tails as seen with meteors. The low altitude made us certain these were not airplanes especially when the six orange ball event happened.