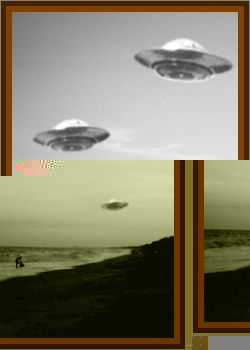 My husband told me not to do it, he said I would open a real can of worms. When did he get so smart? I didn't listen to him, and boy have the UFO sighters come out of the woodwork. Just keep in mind, as former Perrin radar mechanic who sighted not one, but several UFOs in the area in 1951, these things in the sky aren't necessarily from outer space. They are what they say Unidentified Flying Objects. I wrote the first column after a friend saw a History Channel piece that told about the sighting of a flying saucer at Denison, TX in the late 1800s. Research led to that column. Then the second one was after I interviewed the former Perrin Airman, by phone from his home in Tucson, AZ.

During that week and since, a number of telephone calls and e-mails received from others who have seen unidentified objects in the sky. One, shared his story, the first time he had told it outside those that witnessed the objects with him, he said. He shared with the understanding that his name not be used for fear his friends and neighbors today would think that he had lost it.

His sighting took place in about 1956. He & his wife had just returned home in the evening in the area of Mockingbird Lane in Northwest Denison. As they got out of the car they saw several objects at the top of the hill that seemed to be circling each other and trading places from top to bottom. He, about 8 neighbors & his parents came out into the yard and witnessed the display as well, watching for several minutes before the objects split up and flew away. He said he's sure of what he saw, and has a bunch of witnesses to back him up.

A friend at Health Trends pool who read the articles said that her late husband related several years ago, he was returning home from work one evening in the Pottsboro area and saw a strange looking circular object in the field near the Country Store. He told her he stopped his pickup and watched for a minute, then decided he could load it into his pickup and take it home. He crossed over the fence to retrieve it. About that time the sphere took off straight up and disappeared over the store. He told her he looked behind his pickup all the way home to see if the object was following him. It wasn't.

Another person talked of a sighting 50 years ago. She said her parents lived on Snow Road, southeast of Denison, she lived in Dallas. She, her husband, younger son, her brother & his wife were all visiting her parents. She said they were relaxing on the screened-in porch on the east side of the house and were looking out at the night sky. She remembers looking at some red lights in the south, thinking they were television/radio tower lights. Suddenly they started moving toward the north and everyone seemed to spot the objects at the same time. They ran into the back kitchen door so they could have a better view. She said the lights seemed evenly spaced and high in the sky, but not as high as an airplane. They couldn't hear a sound, As the lights moved overhead she and her family members ran to the front door and onto the front porch still trying to figure out what they were seeing. As they watched, the lights began to go up one by one. She couldn't remember how many, but thinks it was 5 to 9, possibly four in front and five behind, spaced like bowling pins.

She said they talked about it for hours and the next morning there were a few lines in the newspaper, saying several people had reported lights in the sky that evening. The suggested theory was that they had seen weather balloons. She didn't believe that for a second, she said their movement seemed too deliberate. Anyway, their identity has never been explained to her satisfaction.

Jonathon Oden, who graduated from Denison High in 1998 and currently lives in the Phoenix area, has an interest in the unexplained. He said that he & his wife saw something strange in the sky in Denton one day in 2002. It was clearly shaped like a huge triangle with straight edges and precise corners. They watched it creep along the sky, headed northwest without deviation from its course, until it was out of sight. He said his interest was peaked that day and since he has learned that North Texas has a rich history of UFO activity. And pointed out that Denison was likely the first place the word saucer was used in print to describe a UFO. He read about that in a book published in 1997 by Jim Marrs, a Texas Resident.

Tom Scott, curator of the Fannin County Museum of History, formerly wrote a column, Bois d'Arc Sketches for a Bonham newspaper, and sent a copy of a column he wrote that cited sightings in the Bonham area as far back as 1843 when Bonham was known as Bois d'Arc. In March 1897 a cigar shaped object was seen in the area. That same month a Dallas newspaper and others in the area reported the sighting of a cigar shaped object between Honey Grove and Paris. A farmer had said he was chased by the object that was dragging an anchor along the ground. The farmer said the anchor snagged his pants and raised him into the air until his pants ripped and he fell.

Two weeks later, according to Toms column, a man going between Bonham and Denton also said he saw some kind of manufactured craft. Others who saw it said it was 200' long with large windows. Some people even said they heard hymns being sung as it passed overhead.