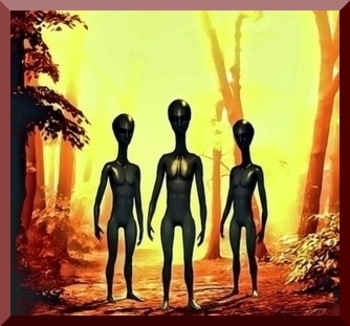 Mrs. E.E. Loznaya recalled, how as a teenager she had a strange and unforgettable encounter.

15 at the time, she was on her way to school along a deserted, snowy, country road on a fine cold winter morning, just before sunrise.

She saw a dark object some distance away in the air moving in her general direction.

As it drew closer she could see that it was a man like figure dressed in black and seen in profile. Its direction formed a 60° angle with the road.

The man was of medium height and the black garment covered him completely, she saw no hands, and on his head was something like a helmet. He held his massive arms tightly against his sides. On his back was a device something like a rucksack.

He suddenly changed course and headed straight for the student. She could now see his right arm was slightly bent at the elbow. As he came closer, she was unable to make out any features on his face, only a black surface. At this point she became aware of a rumbling sound that increased in intensity and it occurred to her that this thing might be more machine than man.

The distance then was no more than 120'. Thoroughly frightened, she turned to search for some place to run, there was no place to hide on the barren snow covered steppe.

When she turned, the figure had vanished as if into thin air, it occurred to her that he might have dived into a nearby snow bank. She fled to her home. The sighting had lasted about one minute and was so remarkable she could never forget it.