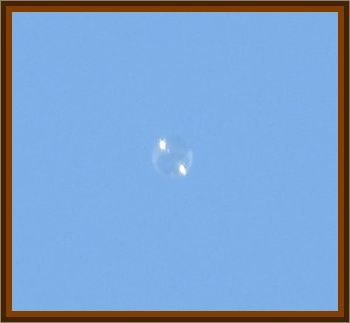 It was a bright sunny Saturday morning in August of 1953 and not a cloud in the sky around 10:30 a.m. to 11:00 a.m. as I left the barber shop. I only live a half a block away and as I walked toward the curb to cross the street I was going in a southwest direction. Now for what ever reason I just stopped and looked up and slightly to my right, which would be in a northwest direction.

At that instant I saw a round object come from out of sight straight down. It was as though the blue sky open to let this object in. It was very high but I could detect that it was spinning, and it looked as though is was transparent because it was the color of the blue sky, round in shape and spinning. This object moved extremely fast downward and stopped instantly, it was just sitting there spinning no more that a few seconds when, now this is very hard to explain, I had a thought as I stared at this object that someone was saying: We have been spotted.

Just as soon as that thought went through my intellect this round, spinning, transparent like object accelerated straight up and out of sight instantly. It was gone.

As I think back to this encounter it may have consumed 6 to 10 seconds at most. But it was 6 to10 seconds I will never forget.