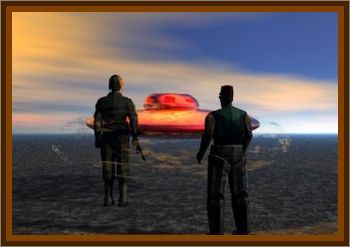 On October 27, 1975, security personnel assigned to the 42nd Security Police Squadron, Loring Air Force Base, Maine were on duty in the munitions storage area, positioned on the northern perimeter of the flight line. Nuclear weapons were stored there in igloo type huts covered with dirt to camouflage them from aircraft flying in the air corridors above. The dump is more than a half mile long and is surrounded by a 12' chain link fence with barbed wire on top.

The area in and around the dump is patrolled day and night by the 42nd Police with K9 patrols and manned vehicles. It is a highly restrictive location both on the ground and in the air.

At 7:45 p.m., Staff Sgt. Danny Lewis of the 42nd police was on duty at the dump when he spotted what he thought was an aircraft flying at low altitude along the northern perimeter of Loring. Lewis watched the unknown aircraft penetrate the perimeter at an altitude of approximately 300'. At about the same time, Staff Sgt. James Sampley of the 219th Communications Squadron was on duty in the control tower and observed the unknown aircraft on the tower radar screen. Its position was 10 to 13 miles East Northeast of the base.

Numerous attempts were made to radio the aircraft for identification and to advise it that it was entering a restricted area over the base. The unknown aircraft began to circle and at one point came to within 900' of the nuclear storage area at an altitude of 150'. Lewis notified the Command Post of the 42nd Bomb Wing that an unknown aircraft had penetrated the base and was within 900' of the weapons area.

The commander of the 42nd Bomb Wing implemented a 'Security Option 3' alert which brought the base up to major alert status. Radar showed the unknown to be circling the base for 40 minutes when suddenly it disappeared from the screen. Either the object had landed or it had dropped below the radar coverage. The Wing Commander arrived at the weapons storage area. Immediately other units of the 42nd Police began pouring into the area. Through the Loring Command Post, the Wing Commander requested fighter coverage from the 21st NORAD Region at Hancock Field, NY, and the 22nd NORAD Region at North Bay, Ontario, Canada. However, fighter support was denied by both regions.

The unknown broke the circling pattern and began flying toward Grand Falls, New Brunswick, Canada. No further unusual events occurred throughout that night although the base remained on a high state of alert into the early morning hours of October 28. [Note: seems to suggest that "higher ups" somewhere knew what was going on and denied fighter support]

At 7:45 p.m. on October 28, Sgt. Clifton Blakeslee and Staff Sgt. William Long, both assigned to the 42nd Security Police Squadron, were on duty at the munitions storage area. Along with Sgt. Danny Lewis, they spotted what appeared to be the running lights of an aircraft approaching the base from the north at 3,000'. It did not come closer to Loring than 3 miles at this time. And it was observed intermittently for the next hour. On first spotting the craft, Sgt. Lewis called the Command Post and advised it that the unknown craft had returned to Loring. Once again, the commander of the 42nd Bomb Wing responded. He reported seeing a flashing white light and amber colored light on the object. The speed and movement in the air suggested it was a helicopter. From 7:45 to 8:20, it was under constant observation both visually by the personnel in the storage area and electronically by the control tower radar. The unknown craft would appear and disappear from view. At one point, it appeared over the end of the runway at an altitude of 150'. The object subsequently shut off its lights and reappeared over the weapons storage area, maintaining an altitude of 150'.

At this time, Sgt. Steven Eichner, a crew chief on a B-52 bomber, was working out of a launch truck with Sgt. R. Jones and other members of the crew. Jones spotted a red and orange object over the flight line. It seemed to be on the other side of the flight line from where the weapons storage was located. To Eichner and Jones, the object looked like a stretched out football.

It hovered in midair as everyone in the crew stared in awe. As they watched, the object put out its lights and disappeared. But it soon reappeared again over the north end of the runway, moving in jerky motions. It stopped and hovered. Eichner and the rest of the crew jumped into the truck and started to drive toward the object. Proceeding down Oklahoma Avenue, which borders the runway, they turned left onto the road that led to the weapons storage area. As they made the turn, they spotted the object about 300' in front of them. It seemed to be about 5' in the air and hovered without movement or noise. Exhibiting a reddish orange color, the object was about 4 car lengths long. Eichner described what he saw next:

The object looked like all the colors were blending together as if you were looking at a desert scene. You see waves of heat rising off the desert floor. This is what I saw. There were these waves in front of the object, and all the colors were blending together. The object was solid and we could not hear any noise coming from it. They could not see any doors or windows on the object nor any propellers or engines which would keep the object in the air. Suddenly the base came alive. Sirens began screaming. Eichner could see numerous blue lights on police vehicles coming down the flight line and runway toward the weapons storage area at high speed. Jones turned and said to the crew:

We better get out of here!

The Security Police did not try to stop them. Their interest was in the object over the storage dump, not in the truck which was in a restricted area. The object shut off its lights and disappeared, not to be seen again that night. The 42nd Police conducted a security sweep of the weapons storage area inside and out with no results. Radar had once again briefly tracked the object heading for Grand Falls, New Brunswick, finally losing the unknown at Grand Falls itself.