Something We Saw Killed Our Car Battery 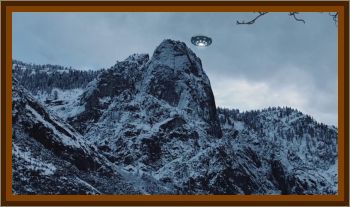 I am not really a UFO buff and have never seen any such craft. However, about 3 months ago, a very odd experience occurred some few miles south of Lordsburg, NM.

Whether you believe me or not is not important. What happened, happened, and that’s it, whatever it was. I’ve just been reluctant to say anything to anyone. The reason I am writing now is probably because the experience still haunts me and I’d finally like to mention it and mainly inquire from you if you have received any similar reports, at anytime in the past, from this area. Nothing like this has ever happened to any of us before.

On a Monday night. My dad, husband, and I were out for a short drive to get some fresh air after a tiring day. We drove about three or four miles south on Animas Road south of Lordsburg, found an area just perfect for viewing the night sky and stars, and to talk and relax. It was about 10:30 p.m. or perhaps a few minutes later. The sky was perfectly clear with no clouds, a slight wind, and a little chilly. After driving a few miles, we came to the old Lady Mary Mine Road, the mine is abandoned now. We drove off onto the road and shone our headlights around the area to make sure we were safe from anyone out ready to hijack cars. There was no one around on the dirt road, we were out in the open, there were no fences, high lines, etc. We turned the car around so that we faced Animas Road, turned out the headlights, rolled a window down and turned on the Citizen’s Band radio. The channels were fairly clear that night, and we enjoyed listening to other CBers.

We had not been there for more than 15 minutes or possibly less when Dad noticed lights coming up from behind the small hill behind us, directly on the Lady Mary Mine Road. It looked like another vehicle coming. Dad had his keys in the ignition just in case something like this should happen. He assumed it was a car and was preparing to move aside. My husband was up in front with Dad and I was in the back seat, on the driver’s side. Neither my husband nor I looked back. Just then Dad panicked, the car would not start. It was still quite warm, in good condition, brand new battery and tune up, etc. only a month before. No matter what he did, it still wouldn’t start. He looked back again and said: Hey, what’s going on here.

Before my husband or I could react, a very strange blue white, more bluish, light shone near the car, on the driver’s side. It lit up only a section near my door and the driver’s side. My husband’s side was pitch dark. The light was strong enough to light up and show in detail the foliage on the side of the road and part of our car. It lasted for only a brief few seconds, prolonged, yet brief, and kind of maneuvering like a person directing a light back and forth. It moved, it was not merely a quick flash. At the same time, we had problems with the CB radio, lots of static. The car wouldn’t start, but the radio worked until the flash of light.

After the flash of light, the car started. We were stunned when we turned around, expecting to see someone in a car or something, but nothing was there. All during this time, there was no sound, except one similar to electricity humming through the wires. Yet, there were no high lines at all nearby. We pulled our car onto Animas Road and looked back toward the old mine road. There, just over the hill, was a fabulous, blue, glowing light similar to a halo effect and yet not arched, solid from its highest point to the ground. It was just beneath the hill. The glow, as I said, was blue with a more turquoise hue and beautiful. We checked the directions and it was definitely not the lights of Lordsburg or any town, or mining operation. Besides, the color of the horizon of city lights definitely do not match that beautiful color.

The incident unnerved us as it was late, sudden, and the area deserted. What we thought had been a car never appeared, yet something was there. We checked on possible aircraft in the area that night, but there were none. Also, the light was very bright, a most definite, concentrated beam, and directed specifically at us. I don’t think the whole thing lasted any more than 5 or 6 minutes, from the time we moved the car, then saw the flash, to the time we moved to Animas Road.

My face felt hot, maybe because it shook me up when we checked several hundred yards. Dad wanted to investigate it, but I had a very strong feeling that we shouldn’t and insisted upon leaving the area and getting closer to town.

Several days after the incident, my brother let slip about our experience to a fellow at work. This young man said that he and five other workers were near that same area, some two weeks before, at about 11:00 p.m. on a Saturday night. They were trying out a new Bronco. Well, they were going down an arroyo and nearing a hill when a brilliant blue white light came around the hill, shone its light on them, and then zoomed southwest at terrific and incredible speed. They said it lit up their jeep and was out of sight afterwards, in a matter of seconds. They were all petrified.

We drove out to the area the morning after our experience, but could find no traces or proof that anything had been there, but Dad had to get a new battery as one cell was dead.