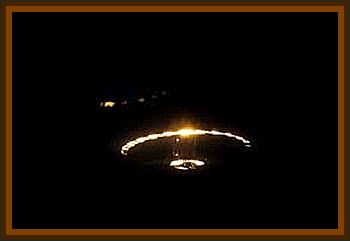 Drew Lopuski says he isn't prone to seeing things. But one Saturday night, about 10:35 p.m, after leaving his shift at Matt's Fish Camp south of Indian River Inlet, he's convinced he saw a flying saucer making its way along the Delaware shoreline.

And no, I wasn't under the influence of anything.

Lopus said the unidentified flying object, UFO, was a big disk with lights all the way around its edge.

It was at least the size of several football fields, said Lopuski.

At first I thought it must be a bunch of helicopters, but that time of night? Maneuvers then? All I know is it was big and it was spinning and rotating and hovering.

And it was intelligent maneuvering, turning and maneuvering in different ways.

And it was solid. It was blacking out the stars behind it as I watched it moving.

Lopuski said he was trying to catch up with the UFO to get a picture with is phone.

But I was already going 80 mph on Rt. 1 and something was wrong with my phone.

Eventually the saucer picked up speed and left.

Drew said he contacted local police departments and Dover Air Force Base but no one else saw what he saw or reported anything like it.

Lopuski's sure he wasn't seeing things and wants to hear from anyone else who may have seen something unusual that Saturday night.