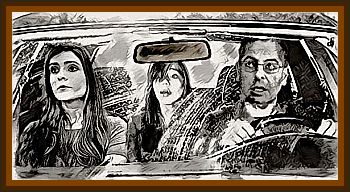 Over 20 years ago a Grafton family claimed they were abducted by aliens on the Lismore-Casino section of the Bruxner Highway.

This is not an April Fool's joke, but an account, whether real or imagined.

On March 16, 1996, Scott and Wendy Longley and their 2 toddler children were driving back from a languid day spent with close friends in Lismore.

They bid their friend goodbye about 7:00 p.m. and before the 2 hour drive, they ate at Hungry Jacks in Lismore. It was dark by the time they started driving west towards Casino.

According to their own story, it was about 3 miles from Casino when Scott noticed 2 strange lights in the vehicle's rear view mirror.

At the same time Wendy noticed more lights in front and to the left of the car, 200 or so fairy lights and they were white and a bright green in color.

Nothing else seemed to happen, but the family reported arriving home much later than usual and not understanding why so much time had passed.

They didn't have to wait long for strange symptoms to start affecting them.

The next day Scott developed a strange blister on his toe, and the whole family claimed to have flu like symptoms, and nose bleeds, when they had always been a picture of health.

A visit to a hypnotherapist recommended by a UFO Society followed, with Scott recalling vivid details under hypnosis of 2 tall beings about 6½' in height" with small ears, big black eyes, 2 dots for a nose, a small mouth, with no lips.

He recalled them taking him, Wendy, and their daughter Bronwyn from the car.

Then they carried me around to the back of the car, and laid me down on my stomach. One entity held my head off the ground. Still watching from above, I saw the aliens with me use something like a silver staple gun, and press it into my neck.

He said he found he could telepathically communicate to the aliens who told him they were a lost family.

I can recall thinking of the aliens:

Moments later after seeing a crowd of some 200 aliens Scott suddenly found himself lying on what seemed to be an operating table.

There was a strong set of lights to my left, and above me there were 3 round lights. I also noticed a mechanical arm at one end of the table, which had 4 claws to it.

Then, after exclaiming that he wanted to return to his family, he was suddenly back in the car.

Scott undertook many more regression hypnosis sessions, recalling further details of the night in question and even other apparent alien abductions and examinations when he was 4, 8, and 14 years old.

The family continued to experience other strange symptoms and abilities, some which were permanent.

These included seeing strange lights and spots, experiencing strange dreams and fears, being able to read people's emotional states and knowing who is calling on the phone when it rings.

The story received widespread media coverage at the time, and stories surfaced of people seeing strange lights on the night of March 16.