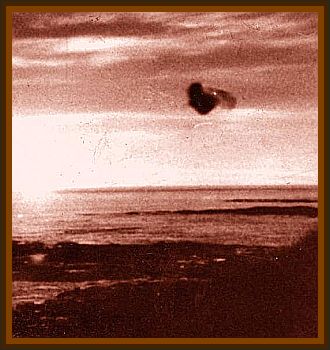 Troops on the ground had some rather strange encounters as well. One particularly bizarre incident occurred in 1970, at Lone-Jon Island, where a 5 man team of soldiers claimed that they were being hunted by bright lights measuring a mere 4" by 4" in size.

These lights were described as disk shaped and having what were called black eyes, and they were said to be capable of great feats of maneuverability, darting, zig zagging, and hovering all over the place.

The team claimed that when they fired upon the objects they would shift color to an angry glowing red, with the black eye part morphing into a bright green. These intimidating, menacing lights apparently stalked and attacked the team during both daylight and nighttime hours over a period of 5 days, often coming shockingly close, to within 5' of the team’s position.

One of the men supposedly took several photos of the bizarre incident.

When the men got back from their harrowing ordeal and were debriefed they told of what had happened to them and were reportedly told to forget about it. Their equipment was also searched and some of it confiscated, including the pictures that had been taken. People were brought in to interview them extensively on what they had seen, and although it was unclear who they were, at least one of the men was convinced that they were CIA.

Even odder still is that a few months later some American personnel allegedly showed up at the homes of the soldiers’ parents asking about any photographic materials that may have been sent to them. The whole thing adds the layer of a sinister cover up to the already rather scary events depicted by the report.