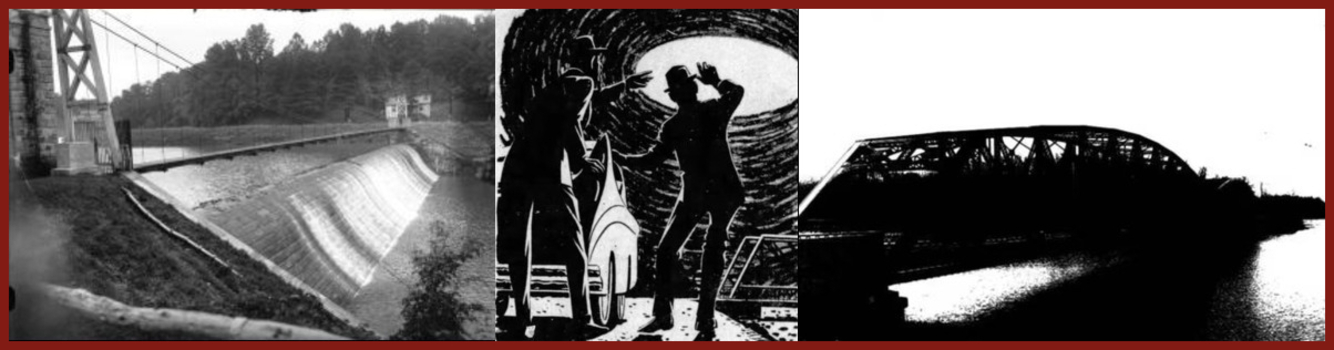 For two men, Halloween 1958 would become something more than just fun and games. Shortly before Halloween of that year, they would find that holiday to be a time when that barrier between the real and the unreal becomes the thinnest. 27 year old Philip Small & 24 year old Alvin Cohen were driving home at about 10:30 p.m. on the night of October 26, 1958. As they approached a bridge on the Loch Raven Reservoir just north of Baltimore, Maryland, they saw an egg shaped craft floating just above the bridge. The object floated above the bridge at a height of 100' - 150' and emitted a luminescent white light.

As the car approached, its electrical system failed and the engine stopped running. Drifting to a stop, the pair got out of the car and hid behind it, observing the object closely from their vantage point for some 45 seconds. Heat from the object was clearly felt on their faces and was almost unbearable. The craft then burst into a bright light and jetted into the sky, disappearing. After disappearing, they hurriedly got back into the car, which started on the first try, and headed back the way they came to find a telephone to report the incident.

Their initial attempts to file a report with the Ground Observer Corps were met with ridicule so they felt forced to report their encounter to the Towson Police Department who sent patrol officers to interview them. Noticing a sunburn like appearance on their skin, the officers had them go to the local hospital for treatment. They were released later that night. The Towson police, not knowing how to handle the report, requested that Andrew Air Force Base investigation the sighting. The Air Force, in turn, gave the case to Project Blue Book for investigation. Blue Book conducted a thorough investigation. Meteorological indication had the weather as having cloud cover with a ceiling of 20 miles with no thunderstorms in the area, eliminating the possibility of ball lightening.

The National Investigational Committee for Aerial Phenomena, NICAP, was involved in the investigation and took magnetic readings of the bridge in question. They determined that the top of the bridge had a slight magnetic field which may indicate exposure to a radioactive blast. The Project Blue Book & NICAP files were incomplete but they seem to indicate that there were several individuals who came forward once Small and Cohens story came out that reported seeing similar or the same object from other locales at the same time. Most of these individuals had not filed a report until after the story went public for fear of ridicule and being called crazy.

One of these individuals was also a student of astronomy and was well versed on aerial phenomenon. Others reported hearing the dull explosion that accompanied the objects ascent into the sky but not seeing the object itself. others, who seemed to have seen the same object were Robert Hargraves & John Lomax. Hargraves was a manager of a local restaurant and was driving Lomax, one his employees, home when they both saw what they described as a glowing light hovering over a field. Very quickly, the object disintegrated. This event, however, took place the following night at around the same time and in a different part of Loch Raven Dam Incident area. Was this the same object that Small & Cohen saw? The description is so similar that many have felt this to be the same craft.

Because of the multiple, independent witnesses in this case, Loch Raven Dam Incident UFO has become an important close observation of a UFO. Project Blue Book & NICAP files have marked this incident as unexplained.

Over the years, there have been a few undocumented incidents in the same general area.

In 1978, a local fisherman, by the name of Mitchell, alleged that a bright round light' rose out of the lake, about 500 yards above the dam, hovered over the water for a few seconds, then dove back into the lake.

A similar account was circulating among several Baltimore City Water department workers in 1983. The only difference was that the ball of yellow light traveled along the shoreline for several minutes before it suddenly vanished. It was stated that the workers had trouble starting their work vehicles after the sighting.

In May 2000, an administrator at Greater Baltimore Medical Center said he witnessed a disk shaped object that looked like green fire fly across the reservoir while he drove home one evening in January 2000. He said he had a very good look at the object since there was snow on the ground and the lake was frozen and covered as well, which provided a very good contrast. This occurred near the Paper Mill Rd. bridge. He stated he stopped his car, got out and noticed a strong sickening sweet odor that made him wretch for several minutes. He claimed that he had trouble keeping food in his stomach for a few days and that his eyesight was so impaired that he was unable to operate a vehicle for almost a month. He also said that he experienced increased joint and back pain since the sighting. The cause of his illness was never determined. About a year later he had taken his own life. Two additional sightings. Both were disk shaped craft that were seen hovering near the bridge area. It is believed that these craft and their operators have a specific attraction to the location