Object With Bright Light Bounced Up & Down 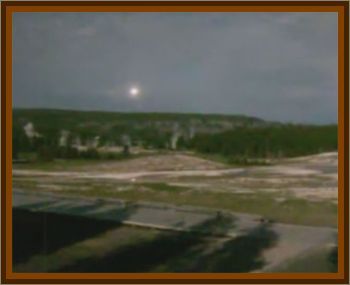 The object with its bright light bounced up and down over the flightline like a bouncing ball, and had no engine sound.

I was a loadmaster on C-130A aircraft shuttling out of Camh Rahn Bay, South Vietnam in 1966. I was standing outside of the little barracks hut around 3:00 a.m. awaiting the arrival of the motor pool to transport me to the flight line for a 6:00 a.m. departure.

As I stood there waiting for the motor pool to arrive, I saw in the distance what I thought was an aircaft coming in to the base for a landing. Usually, I would not have taken much notice of this because I had seen many different aircraft night landings. But because this object, had what I thought was a larger than normal white landing light, and was approaching the runway at an unusually slow speed and wavering in such a manner as if though it were flying through a rough air pocket, I began to take notice of its approach.

Also, I could not hear any sound coming from the its engine. I was certain that this aircraft was going to crash before it could land.

My first reaction was that this object was a helicopter, and the helicopter had lost engine power and was trying to make the runway to land. But, as the object appeared over the runway, it just stopped completely in mid air and didin't move for what seemed like 2 to 3 minutes. The bright light was still shinning but I still could not hear any sound from the engine.

The object then again stopped bouncing and remained stationary for about 2 seconds. And again, in a split second, hurled itself seemingly back to where it had stopped in the beginning, and began again bouncing up and down.

But this time as the object bounced, it seemed to stop abruptly in mid bounce, as if it had just noticed that I was watching it, and in another split second shot upwards into the atmosphere as if it had been shot out of a cannon. It ascended upwards at maybe a 50° or 60° angle and at a speed faster than any aircraft I had ever seen before.

I stood there for approximately 3 or 4 minutes and watched the bright light on this object ascend into the atmosphere and grow smaller and smaller until it became smaller than the few stars that were in the sky and finally disappearing from my view.