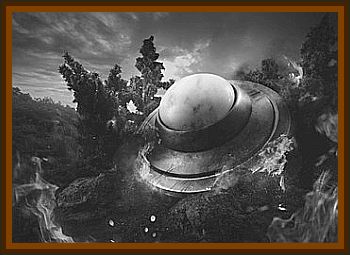 On a winter’s night, a great terrible noise was heard by many of the village, and the first thing that came to mind was that there had been an explosion of some type.

As some of the villagers went outside to see what had occurred, they were amazed by the scene of blue and orange lights near the mountain of Cader Bronwen.

From witness statements, and the next day’s press, came this explanation:

There was a huge explosion a few minutes after 8:30 p.m. From various accounts, this preceded, some say by up to 2 or 3 minutes, a violent shaking of the ground, like a medium sized earthquake, objects inside houses were knocked off shelves.

In a very similar scenario to the Kecksburg crash, authorities rushed to the scene, police first, followed by Royal Air Force personnel. Immediately, the area around the crash was cordoned off with nobody allowed to enter.

This operation seemed like overkill; the area being so remote, and uninhabited. This search and rescue lasted for several days in the Berwyn Mountains.

One witness, who was working at a hotel in Bala, stated that a group of men had arrived at the hotel, and stayed several days. They were involved in the operations at the crash site, but refused to answer any questions about the activities there.

One of the most compelling accounts of the events in Wales came from a lady who was a nurse living at Llanderfel.

She was asked by local police to assist in a plane crash near her house. Gathering her things together, and not having any one to watch her teenage daughters, she took them with her to the location given by the police.

She was driving on B4391, which goes from Bala to Llangynog. The road was nearly deserted, being at 10:00 p.m. on a cold, wintry night. As she proceeded up into the mountains, she was astonished at what she saw next.

There was an object quite intact which was large, circular, and glowing an orange color. Her and her daughters were within a few hundred feet of it. She could not be mistaken at what she saw, a UFO.

She could also see police and military personnel, which were much closer to the UFO. They instructed her to leave the area, even after she explained why she was there.

Afraid for her and her daughters’ safety, she left without argument. Authorities escorted her from the site.

The roads around the site of the unusual object stayed closed for a number of days afterwards. The nurse talked to some of the local shepherds who complained that they were not even allowed to tend their flocks.

She and others were convinced of a military and governmental cover up of what really happened on January 23, 1974 near the Berwyn Mountains.

Was the explosion a mechanical failure of the orange glowing craft, or did another UFO crash. We may never know for certain.