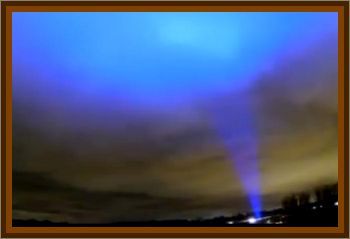 A strange blue light which sped across the entire length of Wales baffled the experts. Some say it was a meteor shower, others are firm believers that was a UFO. Members of the Aberconwy Astronomical Society, AAS, were eager to hear from eye witnesses to help collate information. Eddie Watson-Jones said: There were sightings from South Wales up to Anglesey.

One person, who was night fishing, said a brilliant blue light came shooting out of a cloud and the slowly headed north. The RAF say it was not an aircraft. The AAS, who met in Mostyn Street, Llandudno, were asked by the British Astronomical Association to gather as much information as possible. The blue light was seen at approximately 11:00 p.m. one Sunday evening.

A local fisherman, John Povah, from Rhos Point, saw it passing over Colwyn Bay and Llandudno around 11:00 p.m. John said: Usually when you see a shooting star it only lasts for a moment but this was incredibly bright, It really lit up the whole sky as it streaked past and lasted for quite a few seconds. I'm not surprised some people thought it was a UFO about to land.

Aliens could have been behind savage attacks on sheep claimed a UFO researcher in November 1994. She believed extra-terrestrial entities may be conducting genetic research by taking organs from animals slaughtered on farms in Aberconwy. Joan Amof, the co-ordinator for a Plymouth based UFO research group, read about the unexplained attacks when a fellow researcher sent her copies of the North Wales Weekly News.

And she believed they were linked to a spate of cases in the US, Canada and the UK in which domestic animals were found mutilated. In America, UFOs and entities have been seen in the areas where they attacks happened, claimed Mrs. Amof, who lived near Tavistock in Devon. She added that a Clwyd researcher claimed to have seen a bright light travelling slowly beneath cloud level in the week of the most recent attack.

In October 1994, 5 sheep belonging to a Henryd farmer were found with throats and bellies cut. That came just a week after an incident in which a farmer in Llanrhos Road discovered 2 sheep with their heads and forelegs missing, sparking fears of a satanic ritual.