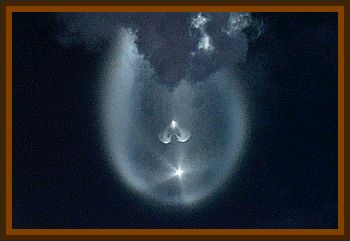 I and another person observed a small silvery object, very much like a distant shiny star, move swiftly in the general direction South Southwest.

At first, I thought it was a star. Then it seemed to move. I thought it was a satellite, then. But the next second the object disappeared, only to reappear at a spot that definitely wasn’t indicative of a straight trajectory, such as the trajectory of an space or aircraft. In other words, the object appeared to be zig zagging across the sky. There may have been some very high altitude clouds, though the sky seemed clear, but the object moved in flickers, we could not follow its trajectory, because it kept flashing, appearing and disappearing.

But even if its trajectory was partly covered by clouds, it was quite obvious that it wasn’t moving in a straight or any kind of normal line. It kept jumping up and down, left and right.

The entire sighting lasted no more than a few seconds.

I don’t think very many people here saw it. The reason for that is banal in the extreme, at 22 h most people are glued to their TV sets watching the late evening news.

But the 2 of us who witnessed it know that what we saw, whatever it was it was real.

We tried to contact some other sky watchers from the area – making it very clear that we were under no influence of substances and that our sky watching experience is substantially above average.

It didn’t seem to help much. The replies were as expected, from a very mild expression of interest to the usual eye rolling sermons, telling us, without even knowing to whom they were talking, that it was probably an effect of our bodies trying to maintain balance, or that it was an optical illusion of some kind.

I don’t know what it was. But I do know that it was no optical illusion.