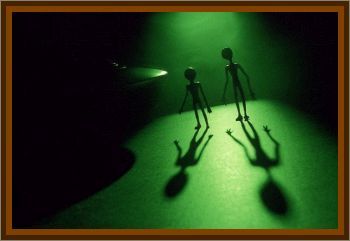 Mrs. H., here after known as Jane C. Doe, a 60 year old innkeeper at a village about 17 miles from Ljubljana, Yugoslavia, was on her way home from the hairdresser’s at 9:00 a.m.. She was bicycling along a cartway when she spotted two figures a considerable distance away, making their way along the edge of a hill.

The figures were dressed in sort of white gowns which reached the ground and there was a black belt around the area just below the chest and they wore black round shaped caps on their heads. The faces appeared dark, and she was not able to observe features, possibly because of the distance because at their nearest point, they only came within 475'.

The lady said that the spectacle was so strange that she descended from her bicycle and walked for a while in order to watch them. Then, she climbed back on her bicycle and proceeded to follow their tracks. She looked around for someone else, but not seeing anyone, she left. By then, the figures were out of sight. Jane said that one of the figures was about 40" in height, and she got the impression that one of the figures was a head higher than the other. They walked together, she said, with their shoulders touching.

When Jane told some local people of the occurrence, they tended to ridicule the episode, so she decided against talking about it further. During one discussion, however, one of the men at the inn asked where she had seen the figures and she told him, and he then said that the night before, his children had come running home very frightened, saying that they had seen two white figures near the field, at the turnip plantation. The figures had risen up out of the turnip field and began to approach the children, and they became frightened and ran home as fast as they could. The little girl was so frightened that her parents had to leave a light on in her room all night.

When questioned, the children gave the following information:

At 7:30 p.m. the children saw two strange creatures with white hoods on their heads and the rest of them, was black. They were moving slowly from the field toward the road. The children said that they were quite close when they rose out of the field, only about 6½' away. One of the youngsters said that their faces were spotted and that they wore a round, white cap and they seemed to be creeping on their hands and knees.

They said they had seen them on two occasions, were not sure of exact dates, but that it was in the evenings, and that on the second evening, the two figures walked upright and wore white gowns and one was larger than the other.

Although Jane did not see any sort of vehicle, whether on the land or in the air, the children said they saw what looked like a Fiat 750, which was behind the figures, with its lights on. It could not be established that a Fiat 750 was, in fact, in the vicinity and inasmuch as small, compact car sized UFOs have been sen on the ground and flying through the air, it is possible that what the children assumed was a Fiat 750, was not. It was dark or fairly so, and the lights on the vehicle might have served to hide or camouflage the contours of the object.