Barbara Lamb and the Lizard Man 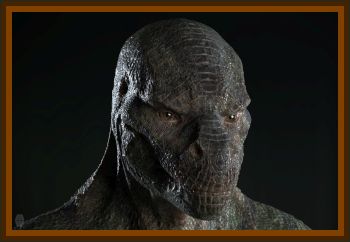 A woman named Barbara Lamb, a psychotherapist who observed crop circles, claimed that a reptilian figure appeared in her house one day.

He was tall and had piercing yellow eyes.

Normally not fond of snakes and lizards, the reptile appeared friendly and welcoming to Lamb, so she reached out to touch his hand. Then the lizard man vanished as suddenly as he appeared.

Barbara Lamb is a psychotherapist and family counselor from Claremont, CA, who studies crop circles, the enigmatic patterns left in fields, often in England, and practices regression therapy, treating personality disorders by taking people back to previous lives.

She recalls the following incident:

I was walking through my home and there was standing this reptilian being. It was 3:00 p.m.. I was alert and awake. I was startled somebody was there.

Ordinarily, Lamb said, she is repulsed by snakes and lizards, but he was radiating such a nice feeling. I went right over and had my hand out. He was taller than I, this close to me, she held her hands a foot apart, with yellow reptile eyes.

Then he was suddenly gone.

She said she had recalled more of the encounter when a colleague put her through hypnotic regression. He said telepathically, Ha, Barbara, good, good. Now you know that we are actually real. We do exist and have contacts with certain people.

There have been many theories and even conspiracy theories regarding Lizard People.

According to the lizard people theory, bloodthirsty reptilian aliens first arrived on Earth in ancient times. Since then, these beings have been merging with humans through the manipulation of DNA, as well as interbreeding with the human population. The goal of this process was to gain control of the world by obtaining positions of power and influence:

Royalty, politicians, popular entertainers. Approximately 4% of Americans believe in the lizard people theory, one of the most notable theorists being David Icke. Icke has written several books in which he provides evidence and further explanation.

This theory seems to have been most popular in the early 2000s with a steady number of believers remaining to this day. If this theory were true, then the human race is being manipulated by an elite group of shapeshifting reptiles.

Although fascinating, this claim seems rather impossible.

A simple way to prove the existence of lizard people is by recognizing the ones among us. Philip Bump’s article:

How to Spot the Reptilians Running the U.S. Government, provides a helpful summary of common characteristics:

Low blood pressure, random scars, a great love for space and science, an eye color of green, hazel, or blue, which may change at any time, and more.

Further evidence exists in the form of video:

Slowing down or pausing can sometimes reveal a glimpse of individuals shapeshifting. However, the staff members of Inverse, point out that this shapeshifting is really a glitch, or compression artifact, a common occurrence when using VHS tapes.

Nonetheless, other evidence exists to support the theory. For example, one website discusses Icke’s findings of lizard people references within Bible passages:

A serpent tricking Eve into eating the apple, the Nephilim interbreeding with humans, Satan’s characterization as a serpent or dragon like being.

Icke’s interpretations of passages in the Bible seem to play a large role in this belief system. Given these phrases were rather ambiguous in the first place, it would be easy for Icke to connect them to his theory. With confirmation bias taking place in this form, it could be said that this is a misinterpretation of evidence.

Therefore, followers of the theory who are exposed to this evidence are misinformed. Another example of a misinterpretation are video glitches that makes people look like they are shapeshifting.

This belief system is mainly supported by average Americans. Since they have no considerable control over the economy or government, it is easy to direct mistrust to those in power. This is especially true when individuals in charge make mistakes, or if the believers personally dislike them.

Little opposition from society also encourages believers. Given the popularity of conspiracy theories in general, it may feel acceptable for people to participate in the lizard people theory as well.

The lizard people theory is heavily reinforced by confirmation bias, Icke has been able to mold evidence in favor of his hypothesis. Furthermore, those who have become attached to Icke’s point of view have also developed the ability to interpret supporting information from vague sources. This belief system may also be connected to a desire for structure out of randomness. It is easier to explain how our world leaders managed to gain such positions of power by linking them to a specific group.

This process possibly provides a sense of comfort to the believers, they can imagine having power over the leaders by knowing their true identities. It should be noted that the lizard people theory is not popular by comparison to other theories.

Therefore, a number of Icke’s followers are likely motivated by a desire to feel unique. With these factors in mind, it is no wonder why many are captivated by the lizard people theory.