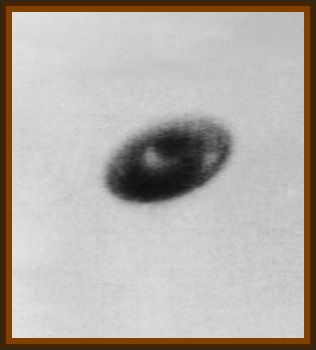 John B. Bean, a flyer with 17 years experience, made the following report in a letter dated February 7, 1953.

After stopping at the Purchasing Office of the Atomic Energy Commission Research Facilities near Livermore, CA, I was driving North on the road which runs parallel to the eastern fence bounding the Commission properties.

Immediately opposite the northeast corner of the fence, I pulled over to the side of the road in order to stop and check some papers which I had in my briefcase behind the front seat of my car.

In order to do this, I opened the door and stepped out of the car, thus facing southward.

Having finished removing the papers from the briefcase, I was about to climb into the car again when I heard the sound of airplane engines overhead coming in from an easterly direction. It was a DC-6 letting down in the direction of Oakland Municipal Airport, which is to the west of Livermore.

As the DC-6 proceeded westward, I was about to take my hand down from my eyes when I noticed a small, whitish object proceeding southward on a course which had just brought it across the commission property.

My initial reaction was that it was some sort of plant fiber floating in the air. Since this was the first clear, sunny day in several weeks and the atmosphere was very spring like, it was a perfectly natural reaction.

It occurred to me that we are still in the middle of winter and, insofar as I knew, there were no plants which were giving off any white fibrous substance into the air at this time. As this realization came to me, I also noticed that this object was moving directly away from me at a very rapid rate of departure.

It began a shallow left turn and at that point I could see that it was perfectly round and had a metallic sheen somewhat similar to that of aluminum with a satin finish. I believe another term for this type of finish on aluminum is known as brushed aluminum. It did not have a sharp glint which one often sees when light is reflected from a conventional aluminum aircraft.

The light was more diffused and whitish in color.

Having gathered my wits about me to this extent, I followed its course and suddenly it began to alter direction, at first seemingly heading due South again, and then making a steep right hand turn.

It also began to climb at the most terrific rate of ascent that I have ever witnessed. I should like to say casually at this point that only the week previously I had watched 2 swept wing F-86’s chasing tails near Hamilton Field late one evening.

Both F-86’s had remained relatively stationary over one spot and I had an excellent opportunity to watch them in several merry go rounds. A number of times they each climbed almost vertically, but their speed was insignificant compared to the speed at which this object was able to climb and execute a sharp right turn.

At this moment, coming in from the East on a due westerly heading, at an altitude somewhat lower than that at which I had sighted the disk, was a jet. It was leaving a very definite contrail all the way across the sky and was on a collision course with that of the disk prior to its rapid ascent.

When I say collision course, I mean that directionally both objects were on a collision course but that actually they were separated by several thousand feet of altitude.

However, it occurred to me that the disk might have taken evasive action in order to avoid the jet.

“The jet proceeded on its course due West and to the South of the Atomic Energy Commission grounds and at a point approximately over Hayward or Castro Valley turned and headed due North.

The interesting facts about this sighting were that I had 3 distinct types of aircraft within my sight range simultaneously so that it was possible to evaluate their relative speeds. Thus there was no question that the disk like object had far more power and far more rapid maneuverability than the others.

An additional interesting factor to be kept in mind is that, where as the jet was leaving a distinct contrail at the higher altitude, the white disk left no contrail whatsoever. Neither of the higher aircraft made any sound. However, both of them were well to the South of my position and the wind was blowing from me toward them at about 15 to 20 knots.

Actually I imagine the correct direction of the wind was approximately northnorthwest.

As soon as the sighting was over, I glanced at my watch and noticed the time to be 3:43 p.m.. The date again was the afternoon of January 27, 1953 and the atmospheric conditions were ceiling And visibility unrestricted.

In closing, there is one other factor which may be of interest.

The whole elapsed time from the original sighting to the disappearance of the disk was approximately 9 seconds in my estimation.

It may have been slightly longer, but certainly no shorter.

3 of those seconds were counted time, 3 or 4 of them were observed time when I had my wits about me, and the other 2 to 4 were initial reaction time.