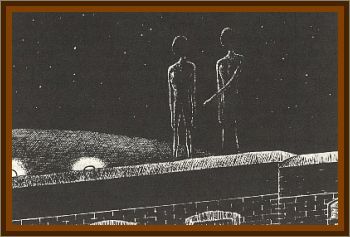 Mrs. Florida Malboeuf, 58, whom was kept from sleep due to a bronchial condition, was sitting at her window at 1:30 a.m. on the Rue Casgrain when she saw an 15' oyster shaped, flat bottomed metallic object, with a row of white lights around its base, come in from the north and land on the rooftop of a 3 story apartment building across the street, some 60' from her.

Immediately two 6' tall figures appeared on the roof, with long arms, wearing white one piece garments with their heads covered with tight bath helmets. They stood looking at the street, then at the sky, then they returned apparently to the object.

The moment after they disappeared, the object rose from the roof, and went off to the east.

Her son Andre went to the roof in question and found on top of the ice and snow there a large elliptical shaped crust of ice, 4" thick, and about 18' in diameter, evidently formed by the local melting of the snow.

In relief on this plaque and going toward the façade of the building were four small, narrow footprints, only 6" long. There were no other witnesses for collaboration.