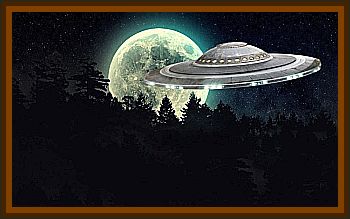 A 55 year old Pole encountered a strange aircraft in vicinity of the Lintel Lake near Rheda-Wiedenbruck city, Germany in 1981. As it turned out he wasn't the only one witness. Onboard the craft he experienced many unexplainable phenomena involving a close encounter with ET beings. After that strange experience he became a renowned artist.

Every once in awhile a UFO researcher sometimes has to deal with a completely extraordinary story. There are stories that ordinary man would surely reject. But the complete reliability of some stories is very hard to establish and sometimes it isn't impossible at all.

Recently I came across a story from Germany that describes an authentic story. It was a report presenting unbelievable encounter with alien beings onboard a UFO.

The witness of that event was a 55 year old Polish, an emigrant and an artist. The occurrence took place in the middle of August 1981, at about 5:30 a.m.

Mr. X, the witness preferred to be anonymous, as usual, without paying attention to the weather condition went for a stroll in order to observe nature. He used to visit small lake Lintel located 2.5 miles away from Rheda-Wiedenbruck where he lived.

Having a bicycle by his side he was walking a wild path.

On the opposite side there was a small harbor with a shed used by sailors. The witness noticed then a fisherman who was behaving in a very strange manner.

Then a gigantic object appeared about 300' to 450' away and was hovering silently at an attitude of about 45' to 60'. It had no windows and resembled a plate turned upside.

Mr. X thought that it was about to fall into water. He began heading toward the harbor observing the object with curiosity and thinking if the fisherman also sees it. But he, the fisherman, soon went away with 2 or 3 men dressed in strange, sparkling suits.

At first the witness thought that they were members of Ecological Guard and the fisherman was a poacher caught red handed. The object moved toward the harbor being still at the same attitude. The witness was heading toward the UFO that was about 300' away.

The bicycle was still getting in the way because the chain was broken down and the witness wasn't able to ride. The object soundlessly landed on grass near the shed. It was somewhat strange because despite the ground inclination, the object was standing straight. It was about 21' to 30' in height and 90' in length.

When the witness passed by signs with inscription:

Sailor's area, Strangers mustn't went in, he saw that an elderly woman with a dog appear at the back of the object.

Mr. X thought that it must be a super modern means of transport and he even assured that he had German Marks for likely trip with it.

It must float over the ground because the dog was walking freely under it. When he put the bicycle on the grass the elderly woman passed next to him heading toward a gate. Mr. X went into the object and asked about the price of the trip and a schedule of flights.

He was assured that it was a terrestrial craft because the presence of the woman with the dog at the place at 6:00 a.m. seemed somewhat strange to him. The craft had an oval entrance, without door.

The man stepped on a pulled out platform and suddenly could heard a ring of his bike. He turned his sight in that direction and saw a strange being dressed in a costume similar to those of the alleged guards. The being gave him a signal with its hand and he knew that he mustn't approach.

The being, that seemed to be semi-transparent, was observing the bicycle.

The Mr. X thought that someone else also must observe the object because it was gigantic in size and moreover fishermen and other people often visited the area. In Eutersloh, located 5 miles away, is a military air base. Suddenly the witness could smell something strange and felt vertigo. The surroundings were filled with a smell of burning rubber.

He could clearly see the object and the beings, but after awhile he was sitting on an invisible bench. He was under examination of a certain humanoid creature standing in front of him. The entity was staring at him and the man couldn't stand that gaze. He turned his head right and saw the fisherman.

The being almost immediately ordered him telepathically to convey to it his sachet with documents.

After handing it over to the being Mr. X noticed that the fisherman sitting beside began taking off his clothing. Another one being was standing behind him and the witness understood that he must approach it, in my way toward the being I was somewhat light as if there was no floor below. I didn't have a sachet and I didn't even know who I am. I saw a cut off head of a cow without left eye and a half of its horn that was also cut off.

There were some chains in it jaws. There were also childish shoes and glasses. They put me on a some table. I felt lightness as if I was devoid of some internal organs.

The interior part of the object was light with pinkish/violet glow.

Mr. X believed that there must be many separate and transparent rooms in the craft. Then the alien ordered him to went in some misty, blue/grayish room. The witness began taking off his clothes and could feel that his body applied passively a horizontal position. After a while he found himself in a room full of beings dressed in suits.

They were occupied with their tasks and didn't pay much attention to the witness.

They were moving their heads and arms, but no appliances were visible. After some time the witness was dressed up again and received his sachet. He hadn't got a belt and his watch stopped. Being onboard the craft he could see many rather odd things.

Here is a fragment of his description:

I could see many lights and I don't know if in the ceiling or by a transparent floor I saw an enormous city with illuminated tower blocks, sometimes I was observing them from various positions. And maybe I was in a some big machine or over it, somewhere far away when it was a night and everything around resembled very much an illuminated city.

The witness was given a narrow and thin belt being 2" wide and 10" long. The man noticed that a hand than handed it over was very similar to that of a human, it was five fingered, but fingers were too long and had no human nails. The room seemed to be completely empty.

The belt in the witness' hand began taking various forms, once it was a square, then a triangle or a wheel. When it was transforming some signs were visible on it. They resemble some of crop formations. But in other instance it, the belt, was transparent.

According to the witness' report, the signs were three dimensional. Maybe it was a some kind of writing or an alphabet of Aliens? But why he was shown it? Maybe it was just a part of some malicious game? Only aliens know the truth.

Symbol could be regarded at any angle. The witness was still grasping the belt and even tried to bend it, but it was always returning to its original shape. It isn't a reminiscence of abilities of some metal elements found in Roswell, is it?

Something unbelievable. And additionally something beautiful and amazing. That thing was demonstrating incomprehensible knowledge. It was a manifestation of technique. The belt couldn't be hidden in a pocket because it was returning to his original shape.

At one moment the witness took his hands off and the belt that should fall onto the floor simply began lightly hovering in the air and rotating excellently. After a moment it slowly landed on a floor beside Mr. X's legs. He tried to pick it up but in vain because it was as if fasten.

Man looked at alien being that stood nearby and at the same time the belt returned to his hand. It seemed obvious that the being possessed a power over many things. Then, in the man's hand appeared a small, transparent ball as big as a tennis ball [its weight couldn't be estimated]. It sparkled with many colors. When the man hid that ball in his hands it X-rayed them. He was terrified with a sight of his palm bones. He wasn't able to estimate temperature of the ball.

Terrified, he wanted to get rid of it but it began drifting in air in the same way as the belt. It was as if a pumped balloon getting bigger very fast. After a while it prevented the witness from seeing the Alien who was standing 1.5 – 2 m. away. The man grasped it again and it seemed weightless for him.

The ball was emitting an image from inside – something like a three-dimension show. There were impossible things inside. From a chaos [a multitude of colorful stains divided by lines] there formed some images. There appeared: a tower [measuring pressure] from the town where he lived and then a town hall and a tower block standing in vicinity of his house.

Then other similar elements were seen, for example: church towers, playing fields, parking lots etc. Mrs. X saw even himself holding the ball and looking into it. He wanted to turn it in his hands but it transformed into a big, glass circle [7-10 m.wide] than got smaller immediately and transformed into the original ball.

Then it disappeared unexpectedly. The alien standing in front of the witness wasn't expressing any emotions and his face was expressionless. I smiled foolishly because it was weird, cool and funny. I haven't seen something like it before.

The humanoid was looking at me as a king at a clown. Anyway I found myself unexpectedly on a scrapheap.” Mr. X woke up 5 km away from the lake he had been abducted. And that's how his encounter ended. Stunned and suffering a terrible headache he was sitting leaning his back on a wheel of an old bus.

It was as if a terrible hangover. Anyway he hadn't participated in a party but in a something unexplainable. Mr. X looked at a watch in a car standing next to a road and noticed that it was 9:00 a.m.

His watch was broken. He also noticed that he hadn't got the belt and his bike. Taking a bath in his house, the witness noticed that he is tanned and his skin was reddish-brown. His whole body was sunburned:

I was ashamed of going to the city hall because I could stir clerk's jealousness because when I'm doing nothing more than sunbathing, they must work hard to 4:30 p.m.

He was very tired but then he discovered that the mysterious encounter left an impressive mark, he became a painter and this work allows him to live in good conditions since today.

This fact reminds me another one case of 45-year-old man from Pulawy [woj.lubelskie, Poland -PC] that also developed his talent in painting after his encounters with ET. On the same day he was abducted the witness went to that place with his friend.