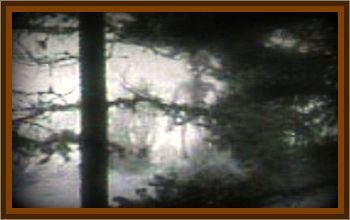 At 12:45 a.m. a 26 year old woman and her 13 year old niece looked out their bedroom window in Lindley, NY before retiring and saw 11 or 12 white lights in a dipper shaped formation that were moving about in the sky.

One bright light appeared on a hill 900' away. They could hear a whooshing sound, then two lights rose in the air. Then next heard footsteps from the creek, about 300' away, and saw two small figures floating up and down in front of a tree by the creek. After this they saw several more figures, at various spots, carrying what seemed to be flashlights. They wore tight fitting, skin diver suits with glowing green belts.

A luminous red rectangular object was seen by one of the women. It approached the creek, and then backed away. At this point they both developed severe headaches. They then saw a figure on a distant hill shining a light on a tombstone there, and the stone seemed to rise up into the air and move back and forth. A figure taller than the others, who were less than 4' tall, stood near the light on the hill and called out with an ooh, ooh signal.

The others all approached him and, 5 minutes later, deployed back into adjacent fields. One of them approached the house. He came under the second story window and dropped to the ground, as if to conceal himself, he then approached the door and rattled the handle. By this time, 3:45 a.m., the older witness had called her mother, who notified the state police. All of the lights and figures disappeared just prior to the arrival of the police, the lights in the sky being indistinguishable from stars. Both witnesses believed only an hour had passed but actually over three hours had elapsed. They complained of burning eyes and headaches that lasted for two days.

Footprints were found in the area.