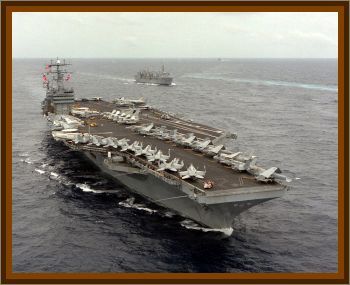 One witness bore the remarkable story that follows. A background check verified his former duty status in the Navy. Currently he works for a technical concern in Connecticut. He expressed concern that he would experience with the navy if his identity were revealed so we will honor his request for anonymity.

John Doe was a member of the United States Navy and was assigned to the nuclear submarine USS Abraham Lincoln (SSBN-602).

According to John, the ship was about one day out of the Panama Canal. It was nighttime. There were 4 men including Sims on the conning tower, filming night lights and algae in the water. The ship's photographer was using a 35mm still camera and 16mm movie camera.

Suddenly a crimson colored, 100', circular disk dropped out of the sky and made a wide sweeping arc around the sub at an altitude of about 10'. At this point, all navigation and sonar were lost on the ship, and the ship was essentially “dead in the water". The photographer filmed the whole event with both cameras. After the object circled the ship 2 or 3 times, it took off at a high speed and in a matter of seconds was gone. As soon as the object disappeared, sonar and navigation came back on.

All 4 crewmen went down and reported to the executive officer what had taken place topside. The photographer was ordered to develop all films immediately and to present them to the commander. The executive officer warned them not to talk to anybody else aboard the ship about the incident. Doe stated that the photographer later told him that everything came out on the film. John claimed that he did not hear anything else about the incident until the ship docked in California.

After they docked, Doe was about to go on liberty when he and the other witnesses were summoned to the skipper's room. Once inside, they were greeted by 2 civilians and one Naval officer and were questioned for about 1 hour about the UFO incident. They were informed that their liberty was canceled. And all four were taken off the ship by military police to some unknown location on the base. Once there, the men were put into an 8' x 10' room with only a desk and a chair in it. They were left alone for about 1 hour with no one coming in or out. One of the civilians, belonging to either the FBI, CIA, or OSI or Navy Intelligence, along with the naval officer came into the room and interrogations began. They tried to convince Doe that he didn't see anything on the day in question. When he tried to explain to them that even the ship's photographer took photos of the object, they began telling him that he was lying and that the 4 men made up the story. John stated that this type of interrogation went on for hours.

When they could not break Doe' story, they left him in the room, telling him they would see him tomorrow. After about 45 minutes, he was taken under guard to a location on the base where they billeted him for the night, telling him that they would pick him up in the morning. The next day, 2 military policemen took him to the same 8' by 10' room and he was interrogated for a full 8 hours, this time by different civilian and Navy personnel. Again the whole interrogation was structured around telling Doe that he did not see anything and that he and the other witnesses were lying.

He was put through the same process the next day. But this time, 3 civilians entered the room with an attache case . The individuals told John that they believed his story and were going to show him photos of types of UFOs. They wanted him to identify the one that he had seen. Doe stated that all photographs shown to him were 8" by 10" glossies showing different saucer like objects. Some were cigar shaped, some were elongated football shaped, and some looked like ice cream cones. Others looked like 2 headlights on a car. He was able to find one photograph that resembled the object that he saw on the night in question. He was then told to sign a secrecy document which said that if he revealed anything about the sighting or the photos he was shown, that he would be court martialed, fined, and placed into solitary confinement for a long per iod of time.

He was told to report back to USS Abraham Lincoln, escorted by military police. Once aboard the ship, he was told to report to the commanding officer who informed him that he was being transferred. He was to pack all his belongings and report back when he was ready to leave. He was taken off the ship, placed on an airplane, and flown to his next duty station in Hawaii.

John heard through acquaintances that the other 3 individuals were taken off the ship and assigned to other duty stations around the World, never seeing or hearing from the other men again.

Doe showed no evidence of lying and desired no publicity about experience. One reliable military source within the Air Force had confirmed the portion of the story in which the UFO appeared near the submarine.