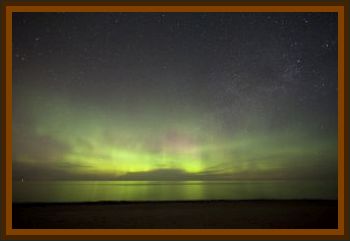 It was like the movie Close Encounters in the beginning with the lights in the clouds, but it was in the 1960s.

I was at the Hotchkiss School in Lakeville, a summer program for inner city youth.

That night we noticed 3 circular lights real big yellow ones just sitting in the sky over I think it was the town of Limerock, they were in a lateral line with no movement, the whole class and student counselors and also the Headmaster watched them for about 20 minutes with no movement.

Then everyone went back in, except for my friend & myself. We talked to each other saying that we felt like we could not move, much anyway.

If you picture the light s at 12:00 high, well at about 8:30, ther was a lot of what appeared to be lightening in a band of clouds flashing on and off, just like In Close Encounters of the 3rd kind movie.

We could make out no shape, we watched a few more minutes, then from 6:00 3 jets appeared heading in the direction of the lights, as the jets went over our heads toward the lights, well the lights went out and a few minutes later me and my friend went inside.

I moved to Maine the next year and never went back to the school or saw my friend again until 1996. I had just gotten my first internet connection, computer, windows 95.

The lady I was staying with had a friend come to fix her computer and her friend brought a friend of his with him, this guy and me beat the bull a little while the other guy was fixing her PC. Well, on my PC, novice that I was I had created a folder on the desktop with my name on it. While this guy an I were talking he noticed the name on the PC of mine, well he recognized my name and this guy had just come back from CA.

I was out there in San Diego in the early 1980s, well any way this guy turned out to be another witness from the sighting, and that was the 1st thing he asked me if I rememberd the sighting and yes I told him I did.

A coincidence yes I guess but it was the PC that brought us together, but I think it was more then that never heard anything about it tho.

I still wonder if maybe they were balloons or something to guide the jets, but the lightening in the sky was all by it self.