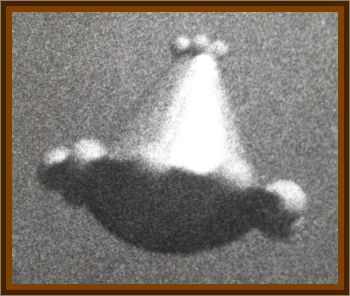 Jane Doe went to bed Saturday night August 31, 2002. She woke up at 1:30 a.m. to go to the bathroom. She heard her puppy barking quite loudly, differently to what she had heard it do before. She got up, got her light, went to the door and shone it outside to where the dog was barking and saw an entity described as thin, very long legs, and about 8' tall. Its approximate body length alone, torso, was 4½'. The head was very dark and she did not see its eyes at first. She didn't recall seeing any arms either. Its head was an inverted triangular shape and this shape was very distinctive. The entity seemed to be dressed in a wet suit material that was dark grey with khaki stripes When she initially shone the light on the entity she did not notice its eyes but she did later when she went to come inside and saw they were really brilliant.

Mrs. Doe called her husband to come and have a look at what she was seeing, which he wouldn't do, so she went to go inside to get him out of bed. As she did so the entities eyes flashed at her and she described its eyes as being brilliant green and approximately 2" in diameter. She said if diamonds were green this would be what they would look like. She went inside to get her husband, who still refused to come out, when she returned to the door the entity was not there. She again shone the light around until she found it sitting on an old ute parked on the property about 15 yards away. All she could see at the time were the creatures brilliant green eyes. When she first saw the entity the hairs on her arms stood up. She was quite speechless and shocked but she was not scared. She did not see anything in the sky at the time.

The next morning, Sunday September 1, a friend rang and asked if she would go to collect his son and bring him back to Jane's place by 6:00 p.m. so he could call him as he wanted to speak to him on Fathers day. While doing so she was told by others they had been watching a flying saucer on the evening of Friday, November 30th at about 8:30 p.m., the night before Jane's experience. Jane wasn't game to speak to anyone about her experience, in case they thought she was looney. The area around Jane's property has a lot of trees.

Upon further questioning it was revealed that Jane and her children have had UFO sightings and strange encounters before this incident.

They are reported as follows:

1. ) Mrs. Doe had a sighting 34 years ago while living at Labrador. Her sons birthday party was being held in the back yard in the evening. It was very dark and she saw a metal cone-shaped object flying across the sky with a huge orangy red flame coming out the back. Another one came up behind it and went straight past it. The object was easily traveling at 700 mph.

2. ) While living at Acacia Ridge, Jane's son came inside, covered in mud and screaming that he had seen something. At the time she didn't know what to make of this incident. A couple of days later she read a story in the Courier Mail of a man who had seen something land near the Dam. She knew her son used to go there all the time. Her son later told her he saw something land as he walked over a hill and the whole time a light was flashing above his head. The same son had seen something at Windsor years ago. This son always refers to himself as an alien.

3. ) Four years ago, while living at Boonah, Mrs. Doe was coming outside to go to the toilet and she saw a woman with blond hair sitting close by. She had never seen her before in her life. The woman put her hand out and grabbed Jane's hand as she walked by. As she did so she said to Jane, I've been waiting for you, you should have been here 3 times before and you didn't turn up. This was true as Jane had been going to leave the Gold Coast 3 times before but didn't. Then the woman told Jane about Jane's whole life from when she was a little girl. The woman said, tell your children to move to the other side of the range as there is going to be a tidal wave and it's going to wipe out the whole of the coast.

Jane states that she always knows when there's an earthquake or tidal wave. Two nights before this interview she said to her husband there is an earthquake or something. The next day she heard on the news there had been an earthquake in England. Lately she has had a feeling that something really bad is going to happen.