I Saw a Circular UFO with Lights 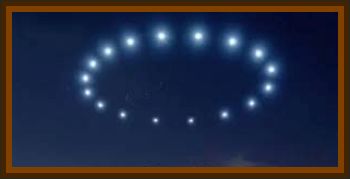 I saw a circular object with lights going around the middle of it.

I was about 5 or 6 years old and it was around lunch because my mother was making a egg salad sandwich.

I was on the front porch eating a Kool Aid pack with my fingers when I looked up and saw a circular object with orange lights blinking.

The lights were around the middle. It was stationary and never moved from the position it was in.

But thinking this was something I never saw before wanted to show my mother, I called her and she came out. She looked up but couldn't see it and as I pointed up to show her where it was it just disappeared.

That night my parents had to take me to the emergency room because I had hemoraged all over my pillow. The emergency room doctors said my tonsils had ruptured. I was spitting up chunks of blood.

I remember thinking that the doctor was dumb because at the time I thought it was really the Kool Aid.