Haunting Of The Blue Ghost (The USS Lexington (CV-16)) 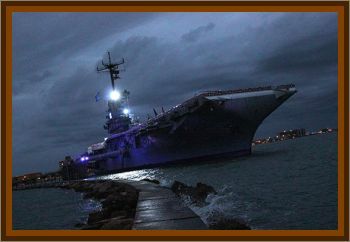 The USS Lexington (CV-16) stands tall and proud on the shoreline of Corpus Christi's North Beach, now a floating museum, but once a battle seasoned war machine, proud of her memorable service to the United States Naval Fleet. And like most battle hardened ships, she has many stories to tell.

But this World War II relic comes with a twist, a white uniformed, blue eyed young seaman who has been known to tell the tales of the ship to museum visitors who have come to tour her. Only this tour guide is a ghost. Staff of the floating museum call him Charly. Visitors have often called him helpful. But whatever you call him, the neatly dressed sailor in white is not part of the museum staff, but reportedly a former crew member that simply failed to depart the ship after giving up his life after a Japanese Kamakazi attack on Halloween 1944 off the coast of the Philippines.

On a Corpus Christi Caller-Times web site, as many as 200 visitors to the museum have reported encounters with Charly. Without exception, the reports indicate the ghostly seaman is a polite young man, that seems to share a great deal of information about the Lexington's engine room far below deck.

Lexington tour guide David Deal, who served on the Lex in 1959-1960, says Charly seems to know a lot about the ship. This apparition told things about the engine that I don't even know, said Deal, who made the rank of airman on the Lexington and retired in 1976 as a catapult chief. It's fascinating, because I'm one of these hard nuts to crack on something like this, said Deal, who added there has been more than just a few accounts of Charly's presence in the engine rooms. So common, in fact, have been the appearances of the eerie spectral tour guide that a ghost cam has been installed in the engine room where you can watch for the ghostly guide 24 hours a day.

There have been other unexplained occurrences. M. Charles Reustle, Director of Operations and Exhibits at the museum, has personally experienced strange phenomenon. On separate occasions, Reustle, walking out of his office, heard the rustle of clothes and footsteps behind him. He turned around, but there was no one there. Other strange occurrences involved a painting and restoration crew on board have been reported .Apparently the work crew had taken a break, but when they returned, the work project had mysteriously been finished for them. In other instances, visitors and staff have reported incidents of ship lights going on and off by themselves.

Charly is apparently not the only ghost to be seen on the ship.

One married couple reported seeing a dark haired man wearing dungarees and a denim work shirt jump to the deck below. There was no one there, when the couple ran down to see if the man was injured. This was not Charly who has light hair. Two museum staffers reported walking out of their offices and seeing a man in a Japanese pilots uniform and a US sailor in the hallway. The two disappeared as the staffers moved closer.

The Museum's communications director, Donna Strong, says she doesn't like to talk about ghosts on the ships out of respect for those who served on the aircraft carrier and their families. She refers to the most recent occurrences as sightings. I like to think the ship really isn't inanimate, there's a lot of history here, and I like to think the ship has kept its personality and energy. There's something more here than just a pile of steel.

It may be simple coincidence, but the Lexington's nickname has long been the Blue Ghost, so named because Tokyo Rose reported sinking the aircraft carrier on four different occasions during World War II. While American sailors jokingly referred to her by the nickname, Japanese sailors, on the other hand, believed she was the ship that continued to return from the grave.