Some Type of Aircraft 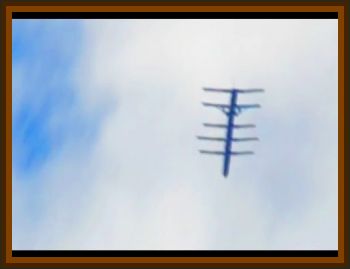 When I was around 8 years old, My mother, sister and I were traveling.

When we came to an area where a huge building was Named the Clipper building. We observed what appeared to be 2 military 4 prop aircraft flying above the building. They were maybe 500' high with one leading and the other trailing behind.

But they weren't moving.

The props were turning and I could hear the noise of them but they just remained over where we were standing because we had stopped to see this strange site. Eventually we drove on.

Some hours later when we came back through, they were still there but only a few hundred feet further than they were before.

Of course we told people about what we had just seen but no one ever has believed me or any of us. I'm just glad now that at the very least I got to tell you. Then maybe my testamentary will remain.

Thank you for this site that allows me to at least be heard. Then maybe some one else who may have had the same experience, can tell their story too. That way we'll know we are not alone.