Boys Knock On Outside Of UFO 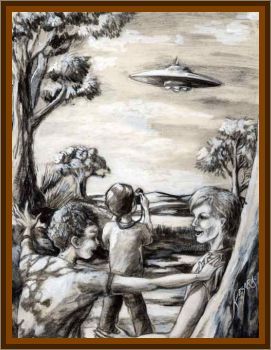 At about 7:00 p.m. when Richard Doe and David Doe, both they and their parents requested anonymity, eleven years of age, were playing outside near their homes. They went down into a vacant area next to the group of four houses where they live. The area measures approximately 80' by 100' and contains a couple of small trees. The ground consists of hard clay covered by dead field grass and the entire area is surrounded by a chain link fence. Several neighboring houses surround the field, about 150' distant.

The boys passed through a neighbor's yard on the way to the field, passed a clump of bamboo, and then came out into the open where they saw a dark object apparently sitting in the darkened field.

They slowly approached the object and after about five minutes, Richard, who had a plastic cased flashlight in his hand, walked up to the object and rapped on it 3 or 4 times with the flashlight. The rapping made a metallic sound. Immediately a dome on top of the object, which was about as high as its diameter, became illuminated with intense red light, a very brilliant bright red which illuminated the entire area. At the same time the object, which had been about 18" off the ground, rose up to about 3' or 4' from the ground, whereupon a row of green lights around the peripheral rim of the craft started to blink in sequence and the object began to rotate, making a sound which resembled: woooo-shooooo-woooo-shooooo. The rate of rotation became very high with the red light blinking on and off, then the red light went out momentarily, came back on, and the object rose into the air, still making the sound.

The boys, by then frightened, started to run, feeling chills and a tingly feeling, weak, like we were going to black out or die, and like we were running in slow motion. They said the object took off toward the southwest, and after they had left the field and got to the street, they saw it disappear into the clouds. Both of the boys' mothers told the Field Investigator that the boys were not in the habit of telling tall tales and stated that the boys were very excited when they came to the house after their experience.

During the questioning, it was learned that the object was approximately the size of the living room, kitchen, and bathroom area of the houses in which the boys live, or 20' in diameter. The interview was conducted in the field where the object was seen, and the height of the craft was set at 10' or 11', based on the size of an adjacent tree. Further investigation revealed two holes in the ground which measured 6" by 6" square by 6" deep, about 6' 8" on centers. A 3rd partial depression, forming an equilateral triangle with the two holes, was apparent on a slight rise of the ground level. The holes were located 400' from the back fence and the hole nearest the side fence was about 23' 3" from it. Dead grass in the field seemed to be lying in a counter clockwise circular pattern. The ground was extremely hard dry clay and the holes appeared to have been sheared by something extremely heavy.

Residual magnetism was checked but nothing out of the ordinary was detected. The investigator also found that several residents in the area had experienced television interference at about 7:20 p.m., the time that he estimated the object took off. Another strange coincidence, if it is that, is that the X Axis and the Z Axis of the magnetometer at La Posta registered a perturbation at exactly 7:20 p.m. that evening.