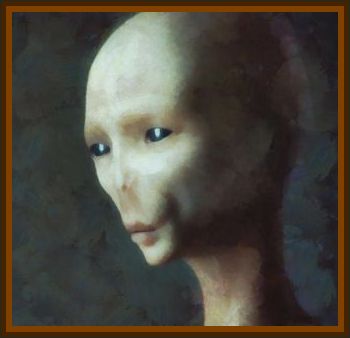 I was at home in bed with my wife sound asleep. We lived in a cottage in a small village in the county of Cornwall. The cottage was situated down a narrow small access lane on the edge of the village surrounded on 3 sides by rural farmland. There is no outside lighting and no near light pollution.

I gently awoke from sleep for no reason. I usually sleep well totally undisturbed in the quiet and dark location. As I woke, I became aware that there was a light in the room, albeit not too bright. More akin to about half a dozen candles. As I was becoming more and more awake, I realized this was unusual and decided to turn from lying on my side onto my back, lift my head slightly, and see where the light was coming from. I first thought it must be from the one and only small window.

That thought lasted a nanosecond as I was confronted with the light source only 6' away at the foot of my bed. Thought number 1. What the f”%& hell is that. I obviously could not take my eyes off it as my brain went into explanation overload but no answer was in the database, and my own sense of reasoning told me this is not happening. But as time went on, just a minute or 2, my brain and reasoning started to calm down and I regained control. Let me just say that at no time did I ever feel frightened or threatened, in fact just the opposite.

Standing at the bottom of my bed was a creature not of this world. He or she did not move, but just gazed right at me. The eyes did move though, very slightly when the creature appeared to blink very slowly.

I was overwhelmed with a feeling of calm and peace which the creature seemed to be transmitting like some sort of telepathy. I then felt it was ok to lift myself up further with my elbows to be more comfortable. Then just as I had done so, my sense of reasoning kicked in. First of all I have got to be sure without any doubt what so ever, that what I am seeing and experiencing is absolutely true, and not a figment of my imagination. Not a dream. Not some trick of light. Not some quirk of physics or anything else.

These thoughts were very strong because you can not explain what is happening, what you are seeing, but you need too, and quickly. So first thing I had to do is convince myself I was not asleep and dreaming. Well it is the middle of the night and I was in bed.

I already knew the answer but I had to check and double check. Yes I pinched myself numerous times, but you do know when you are awake. The creature was still there. Happy with the I am awake checks, onto the next thing.

Maybe, just maybe it’s a trick of some light somewhere, I have to remove that doubt as well. So first to the window and, nothing, pitch black as usual. Not even a hint of moonlight which you can get on a clear night with a near full moon. Right, window checked, I need to check the rest of the room now as well. The creature was still there.

Gazing, and appearing to smile. The light just emanated from the face. I didn’t want to take my eyes of him or her for a second but I had to, to check the rest of the room. I started to the left of me at floor level, and slowly scanned every inch of the floor and lower wall until I had been round the whole room. I then moved up a couple of feet and repeated the process. I then covered the upper wall, the ceiling, the whole lot. Nothing. I then repeated the process again because my brain was not accepting it somehow.

Well I had done everything I could do, to try to explain this thing, now I had to just accept that what I was seeing was very very real, and an alien to this world. The best way I can describe the creature is from the film Close Encounters of the Third Kind.

The alien that comes out of the spacecraft towards the end of the film. Similar to what is described today as the classic grey. The one at the end of my bed was just over 4' tall. The head appeared slightly more round than the classic grey. The eyes were large and slanted up, but not black. They were very open as I have already said. The pupils were large and what we describe as the white of the eyes, this was a faint very pale yellow. I could not notice any nose or ears. The lower body and arms were not lit by the light so a description was difficult.

After I had accepted the truth of what I was experiencing, my main thought now was, nobody will ever believe it. You must have been dreaming. How many had you had last night? I glanced down at my wife to the right of me, sound asleep. She is my only possible witness. I then tried to wake her with gentle movements of my hand against her leg under the covers. My wife eventually started to make noises, turned over, and obviously didn’t want to be disturbed. But I persisted. She started to talk without opening her eyes.

I gave her leg a good shove and looked down at her, and just as she was about to wake up and open her eyes, the bedroom went dark. I quickly looked round and the creature was gone.

How? I don’t know. Was he or she beamed down like something out of Star Trek? Maybe. Did I imagine or dream the whole thing? Absolutely One Million Percent No. The whole experience lasted 15 to 20 minutes approximately. That’s the way it happened. And it is firmly etched on my mind and will be until I die.

I sometimes still stare into the dark when I am in bed and expect the creature to return. And when I look up at the night sky I hope he or she will return and tell me of their life in the other world I know exists, somewhere.