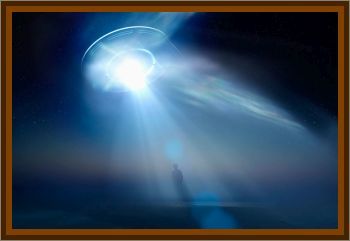 A woman was abducted front her home, as well as possibly three of her children and a neighbor boy, and given a medical examination on board a craft.

Carrying a machine of some sort, three beings lifted the woman from a couch and carried her by the arms. Her next memory was of a big, bright room with lots of lights and buttons and glass tubes containing liquid. She observed four or five humanoids on the craft and at least two human beings.

The humanoids did not communicate with her, they were coldly efficient, and made her feel like a guinea pig. They were 4' to 5' tall, with head coverings, no noses, long fishlike mouths, orange hands, with 2 or 3 big claws or fingers that opened like a clasp. They had large oval eyes that wrapped around the side of the head. The pupils were big, black and round and moved a lot. Their suits were a fluorescent silvery and blue, the three beings in her home were described as wearing shiny, bright white uniforms.

During the exam she was hooked up to a machine, probed with needles, given a blood pressure test and a gynecological exam. The beings were able to read her mind. One of the humans was bald, about 55, and talked with her and helped during the exam. They gave her a shot to make her forget, then carried her out a door to be reunited with her children. The incident took 45 minutes to an hour.