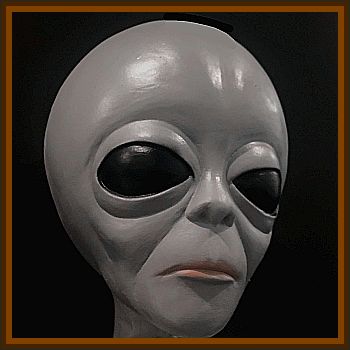 Jan Siedlecki was working late at Brydon’s Garage and had walked a short distance to his home and retired to bed.

A brilliant white glow flooded the bedroom. Thinking that the garage might have caught fire, Jan jumped out of bed. What he saw was a strange craft, hovering about 10' to 15' off the ground, wobbling, as if trying to land. The craft was saucer shaped, of a glistening deep blue color.

Jan stepped outside to investigate. He dashed across a road and hid behind a fence to watch the strange machine as it hovered above a large expanse of grass, about 225' away.

The craft finally descended silently, supported on several leg like protrusions. A few seconds later, Jan observed a tube descend from the center of the object, which was a few feet wide, and which reached the ground. Although the entire object was dark, unusual glow was pouring from its underside. Then the tube opened like a book.

2 humanoid figures, approximately 4' tall, walked form the tube and stood in front of the object. Noticing Jan, they beckoned him to come closer. As he walked slowly towards them, he heard a conversation taking place, but could not understand the language.

The figures were wearing one piece suits of a yellow/orange color, and a kind of helmet with a darkened visor over the face area. They wore mittens on their hands, and some kind of boots or shoes, which appeared to be integral to the suit. He also noticed a panel with a series of square shaped switches and circular buttons on the chest of each humanoid.

When the humanoids began adjusting these, Jan was surprised to hear them speak recognizably:

We are in trouble with ship, we will have to make repairs before we leave, they said. We apologize for the intrusion. As soon as repaired, we go.

The tone of the voices sounded tinny, like a little boy speaking. Jan was invited inside the lift and he watched the doors silently close and the tube moved rapidly upwards.

As he bent down to walk under the hull, which was about 5' off the ground, he noticed 2 rows of what looked like small rotor blades rotating very slowly. The doors opened out into a metal cabin.

Standing on a shiny surface, he immediately became aware of a smell of rotting grass. The humanoids led him up a sloping ramp that spiraled around what he took to be the ship’s inner perimeter, then into a room. Around the edge of this room lay a 2' wide channel of flowing water, with some kind of green grass, about 2' high, growing out of it.

How fast does the ship fly?

B13 came the cryptic reply.

Then another door opened. Peering into the semi light compartment, he noticed in a far corner, 4 or 5 crouched figures, with their heads in between their hands and knees. Unlike the other 2 humanoids, they were dressed in black one piece suits, with no helmets, and had brown hair.

The figures were gathered beside a circular pool containing a black, bubbling, oil like substance, from which flashes of red light darted into the air. The light inside the ship was constant, an unusual yellowish orange light coming from all the panels. There were no windows or visible openings.

Then a football sized ball of orange light darted around the room in stops and starts. At this point he heard many footsteps, as if there was panic. One of the men then very politely informed Jan that he would have to leave, explaining that they had a space bug.

Jan was ushered down the spiraling staircase and into the tube. When Jan was inside the man said:

When you get out, run.

The door opened and Jan ran quickly to his former position behind the fence. Staring at the craft he suddenly heard a loud, high pitched whistling sound. The tripods and the tube lifted inside the object, the whistling intensified, and then the object shot away at an angle of 45° into the sky. He saw red fire pouring out from its underside.