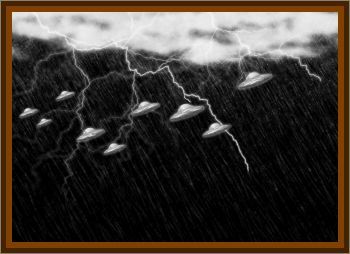 In February 1978 a story appeared in the Montreal Gazette regarding a report of an entire fleet of UFOs. The sighting occurred five years earlier in 1973.

According to the witness, UFO investigator, Marc Leduc, a physics teacher at École PolyvalenteÉdouard-Montpetit in the 1970s, along with a member of the investigative team UFO Quebec, after receiving dozens of reports of lights in the skies over Montreal, and investigating for himself, he noticed a squadron of UFOs flash across the sky from south to north, that moved as fast as shooting stars.

In an effort to prove the veracity of his sighting, Leduc commented that the UFOs moved as quickly as a shooting star, but lasted far too long in the sky to be one, or a meteor.

Steadfast in his opinion, even though he discredits many other UFO sighting, Leduc firmly stated: I know they were UFOs.

What’s more, Leduc who has a reputation for brutally discrediting many UFO sightings, would claim the following twelve months was to be a busy year for such activity. and he would be quite correct, with many sightings not just in Canada, but worldwide. There were several abduction cases from the United Kingdom, strange sightings in Australia and New Zealand, as well as generally increased reports of activity in the United States.

The following month in Montreal, in March 1978, two people camping by Lake Baskatong would witness a strange object hurtle out of the sky and then hover over the lake for around thirty seconds. The petrified campers did manage to capture a picture of the object, but the conditions and the time of night made it impossible to distinguish any features.