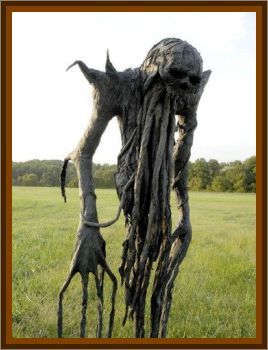 Madame Leboeuf, had gone to gather mushrooms in the woods not far from the cemetery at Chabeuil about 4:00 p.m. There were a few people visiting the cemetery at the time. The dog began to bark and then began howling as if in misery.

Madame Leboeuf looked around and saw that the animal was standing at the edge of a wheat field in front of something which she thought at first was a scarecrow.

Upon approaching the dog, she saw that the scarecrow was some kind of a small diving suit which appeared to be made of translucent material.

The whole affair was about 3' or a little larger, and the helmet was translucent also. But suddenly she realized that something was inside of that suit and that it was looking at her. She later said she got the impression of eyes, but that they seemed to be larger than human eyes. At this moment the thing began to move toward her with a sort of quick, waddling walk.

Until the creature, or whatever it was, began to approach her, Madame Leboeuf had only experienced slight surprise and mild curiosity, but when it started toward her she became frightened, screamed, and fled into a nearby thicket to hide. When she turned to look again she saw nothing unusual, but the dog had begun to howl again, accompanied by the howls of the other dogs in the village. Next, to her surprise, a large, circular, and somewhat flattened metallic appearing object rose from behind nearby trees and moved away at low altitude, making a whistling sound as it flew. It gained elevation as it crossed about the wheat, then veered and took off toward the northeast at high speed, gaining altitude all the time.

Meanwhile, Monsieur Leboeuf heard his wife's scream, as well as the whistling sound, and ran to her as did some of the people at the cemetery. Soon practically the whole village was on the spot. At the place from which the aircraft had risen a circular area was found about 10' or 11' in diameter, in which the shrubs and bushes were crushed. A 3" branch on an acacia tree at the edge of the circular area was broken as if from pressure from above. The branch on another acacia tree, which hung over the circular area at about 8½' from the ground, was stripped of leaves. For a few yards at the beginning of the wheatfield across which the object had flown, the wheat was flattened out in radiating lines.

Police and reporters were struck by the nervous shock suffered by Madame, the physical traces left by the object, the number of people who had heard the whistling sound. Madame Leboeuf suffered a state of nervous collapse and spent two days in bed with high fever. The dog was still visibly frightened and tremulous after three days had passed.

A half an hour after Madame Leboeuf's ordeal, witnesses at Col du Chat, which is 65 miles northeast of Chabeuil, saw an object arrive at that location.