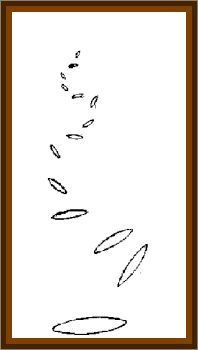 Military pilot and another witness, working at airstrip heard a deep heavy sound and saw brilliant round white object with small ray like appendages descending in a falling leaf motion but without the upward swings, then hovered, moved about 50' against the wind to original position, after 45 seconds began to climb using reverse falling leaf maneuver, picked up speed changing color to orange tint.

Captain R.E. Barnes was thawing and heating a C-47 at Barter Island air strip when he heard a noise that seemed to be out of synchronization with the Herman Nelson heaters running nearby. He ducked out of the wheel well and walked over to the heaters located in front of the left main gear. He immediately realized that the noise was emanating from a large, round, bright object which was descending over the building area about 3/4 of a mile away.

This object appeared to be at approximately 5,000' in altitude and descending in a sort of falling leaf pattern. Captain Barnes estimated the distance covered by the side to side movements at about 200'. Approximately 45 seconds later the object had reached an estimated 2000' directly over the building area.

The object was described as round in shape and brilliant white in color and approximately 30' to 40' in diameter. Small ray like appendages appeared on either lower side.

After hovering for approximately 45 seconds, the object began an ascent using the same pattern as it did for the descent. During the climb out, 1st Lt. Lewis E. Griffin arrived at the aircraft and Capt. Barnes pointed out the object for Lt. Griffin. a rated pilot.

At this time the object was directly overhead at an estimated altitude of 10,000' to 15,000'. The two witnesses continued to watch the object for two more minutes as it traveled to the east blinking as it went. Capt. Barnes is an F-94 jet pilot with 1470 hours of flying time.