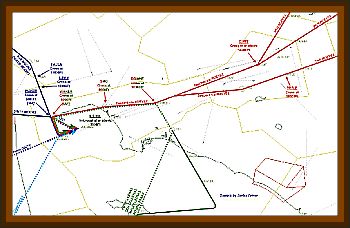 I saw one UFO many years ago.

However before I explain that one sighting, let me preface by saying that over my four decades of flying for both the military and the civilian airlines, I have indeed seen quite a number of Unidentified Flying Objects - UFOs. Nevertheless every one of these UFO sighting was soon quickly identified by me or by others later as something easily explainable and mundane, and thus no longer unidentified… except this singular one I now describe:

I was a captain flying a B-737 late at night on a very short leg from Las Vegas (LAS) to Los Angeles (LAX). This was sometime in the 1990s. It was late at night and the more normal heavy air traffic around LAX was greatly reduced at this late hour.

At the time we were early into our descent into LAX via the old Civet Arrival. It was a clear night and a smooth and comfortable flight. Passing through 18,000'/5486m we noticed what we thought was another aircraft well off to our left and high above us. We had no other traffic to observe than this one. While we were on perhaps a 30° intercept to the final arrival course, this aircraft high and to our left appeared to be on the normal, straight-in course to LAX.

We decided this approaching aircraft would not even be close to being a conflict for us since it was well off in the distance. We would intercept the final inbound course well ahead of him. Since he was not a conflict Approach Control never mentioned him to us either.

Although this traffic off to our left was on the normally expected radial and altitude for the LAX arrival, one thing caught both my First Officer and myself as odd. We were passing below 18,000' in our descent. This is the time and altitude that airliners will normally turn on their landing lights for a see-and-be-seen standard collision avoidance procedure.

However, although this other aircraft was still well above us, he already had all his bright landing lights on. Q

Switching our radios from Center to LAX Approach Control we turned our attention away from that strange aircraft and concentrated on our approach at hand. Nevertheless I naturally and briefly glanced a few times at our unusual inbound traffic.

Right before we made the right turn to intercept the final approach course, I once again glanced up at our traffic. What I saw I would never forget! Those bright lights we thought were from an aircraft on approach suddenly and almost instantaneously moved horizontally across the night sky by maybe 35° to 40° and at a considerable distance! Nothing could move that fast! It defied physics.

I turned to my First Officer and asked: Did you see that? His eyes were as big as saucers as he said: I sure did!

There was no craft that I knew of or anything I could ever imagine moving that far and that fast across the sky, and then stopping instantly without any apparent slowing, dead in space. Moreover there is no man or beast that could ever survive the amount of G-forces both from that extreme acceleration or the almost instantaneous stop.

A few seconds after it had made this astonishing move, it made another much shorter and very quick jump a couple of degrees downward. By this time we were almost passing through the localizer and we had to turn away from this thing. As I looked back over my shoulder I saw it move again horizontally toward its earlier position rapidly, but nowhere near the almost instantaneous movement across the great span we saw earlier.

I later wondered if maybe it was the reflection from some kind of searchlight, but it was a clear night with no clouds to reflect upon. Also it had multiple and distinguishable lights, just like an airliner’s.

We never reported this incident although I have thought about it over the years many times. Really what could we say? Besides people look at you funny when you say you saw something but don’t know what. It also involves a lot of paperwork too, we assumed. So we kept quiet. Curiously I do not even remember my First Officer and I ever talking about it later. It was just on of those unexplained things that we could not explain and did not even want to try.

Ironically the following week I flew the same flight at the same time but we thankfully saw no UFOs this time. What was very curious though was when we switched frequencies, there was a lot of chatter – something unusual for that usually slow time of night. All we could tell from the chatter was that one or more crews had seen something.

There were transmissions from several aircraft that said: Yeah we saw it too. Then Center or Approach came up and asked each aircraft if they wanted to make a report. In rapid sequence, they all said negative. I never did either.

That’s my story and I’m sticking to it!