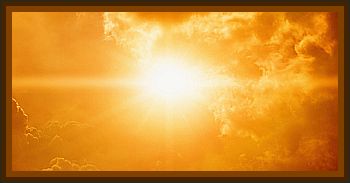 We both had saved just enough to afford one additional year at a university. My buddy chose Wichita State. I chose Kansas State in Lawrence. We were in my car a black 1949 Chevy that I always kept clean and polished, which will be important for what follows.

The night of our sighting we were on our way back to work on a narrow paved two lane road that lead north into Rock Road in the southern part of Wichita. There were no shoulders back then just huge drainage ditches and no street lights on either side of a narrow a two lane blacktop.

Just as we were approaching town I suddenly saw a huge bright, yellowish light reflecting in the hood of the car about a foot in front of the windshield. I immediately slowed down leaning forward looking up but I couldn’t see a thing. I elbowed my buddy who was asleep saying:

Wake up and stick your head out the window, look straight up, and tell me what you see.

His reply was: What?

I repeated and he got it.

It just looks like a big bright light to me. Well does it look like a flare?

A logical guess, as I realized we were almost adjacent the huge Boeing aircraft plant.

What does a flare look like? Oh good grief. My buddy was not a tech guy.

Well, does it look like it’s hanging under a little parachute trailing a small stream of smoke?

No. It’s just a big bright light with edges that look, soft or funny like.

Yeah! That’s exactly what I’m seeing in a perfect reflection in the hood.

What do you think it is?

It’s not a plane because it’s not moving.

I know it’s just hanging there, and we sure don’t hear any helicopter.

We sat there watching for about ten seconds as I checked for traffic as we were stopped in the travel lane. I could easily see about a mile in both directions, saw nothing.

Hey, wait! Did you see that?

What the heck is this some kind of really late firework display?

Yes, I see the little tiny one separated from the big one, but it didn’t go very far.

After a short pause, the little one shoots off East North East and disappears in about one second.

Oh Wow! Did you see that.

Then the large light changes.

Hey, does it look to you like the big light is getting bigger?

It sure does. And now it’s getting brighter too.

Yes. Oh, Wow! There it goes too. Same direction as the little one.

The larger light took about 4-5 seconds to disappear then my buddy pulled his head back inside.

Ok, what the heck was that?

We sat there. I checked traffic, again nothing.

Unfortunately, Don passed away a few years ago. Only once when I was back in Kansas at a dinner with a group of friends did I have a chance to ask him what he thought we saw that night of the UFO.

Naw, it was just a big light.

Without other folks present, I had a feeling our conversation might have been far more interesting. I was still years from retirement back then and didn’t think to follow up as I certainly would have if I’d been researching this UFO stuff the way I have been since retirement.

Here’s what I found recently:

Some history The following history might help to somewhat corroborate our visual sighting time in late July or August 1956 in Wichita.

The huge Boeing plant was ramping up B-52 production in 1955 and upgraded the airstrip adjacent to the Boeing plant to handle the extra weight of the B-52s as crew training began about mid-year in 1955. The first B-52s went Operational in February 1956, at Castle AFB, SAC base, northwest of Merced, CA.

As flying ramped up, production glitches at Boeing and mandatory runway repairs at Castle grounded all of the new BUFFs for short periods during those first few months.

The conditions and my enviornment were:

Moon: not in sight

No other planes visible Observed at: Our zenith

Size: Took entire palm to cover at arms length, even larger before disappearing

Small Light Size: Could cover with small finger at arms-length

Distance between lights: One diameter of large light

No loss of time for us.

Follow up: Week after, Wichita Eagle, KAKE TV no notices Story details & dialog On a warm summer, July or August.

Sunday evening in 1956, my buddy and I were on our way back to work in Wichita the next day, my buddy was an accountant working at a large company and I had just been hired the previous June aa a Technical Illustrator at the Beechcraft mfg. plant. We both grew up in Arkansas City near the southern Kansas border about 60 miles south of Wichita, and about once a month we would go back for a weekend in our hometown.

We were friends in High school and Junior College where we both worked all five years saving money for college beyond what we could get right at home in Arkansas City.