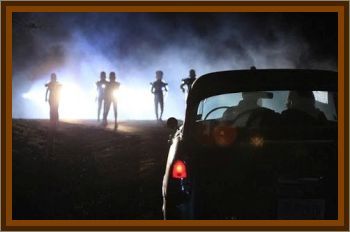 Businessman Beauford E. Parham was returning home late on that evening. He was between Carnesyille and Lavonia, Georgia, in the northeast corner of the state.

The UFO, big enough to hold a man, was amber-colored, about 6' tall and 8' wide. A tower-like projection with a dark band was seen at the top. Vane like configurations were also observed. Small portholes dotted the bottom, through which flames could be detected. Although he was traveling at 65 mph, the UFO kept an estimated 5' in front of the automobile and only one or 2' the road. The top part of the object was tilted toward Parham, who followed it in a near trance like state.

When the object left, it went up over the top of my car, leaving a strong odor, like embalming fluid and a very gaseous vapor which left an oily substance all over my car.

After disappearing, the UFO reappeared for a 3rd time, again heading directly toward the car. The vehicle's motor began to miss and Parham stopped the car.

After spinning like crazy, the object took off and disappeared in a split second, by this time, my arms were beginning to burn, and my only thought was to get somewhere and let someone know what I had seen.

He drove to Lavonia, then to Anderson Air Force Base, South Carolina, to report the incident to FAA officials and newsmen. Parham said that repeated cleanings of his car still left the oily marks, and the burning sensation remained even after his arms were washed.