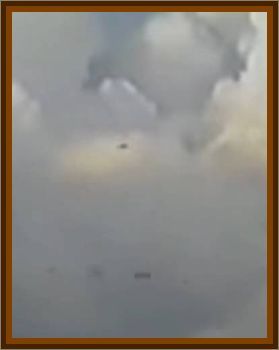 ECUFOR has completed its preliminary investigation during this past week of the Graaff-Reinet sighting during which video footage was made of alledged UFOs. Testimonies of primary witnesses have been obtained.

No additional witnesses have come forward during the past week. Basic details of the sighting are as follows:

On December 27, 1998 at about 3:00 p.m., the Laubscher family observed between 8 to 10 objects moving rapidly in a Northernly direction over Graaf-Reinet, a small town situated in the well known Karroo and some 162 miles NNW of Port Elizabeth. Mr. Laubscher managed to capture on video a few minutes of this incident.

According to the witness desciptions and supported to a certain extent by the video footage, the objects appeared somewhat roundish triangular and seemed to move in a group. Occasionally one or two would stop and the others would circle around them and then they would go forward again. This motion repeated itself a few times. While moving the objects were shinny gold in color but when stationary appeared to switch to red and then to blue. The size of these objects was judged to be roughly 4 to 5 times that of a Boeing at the same altitude. The group had been in view for a few seconds when another much larger object travelling at very high speed in the same flight path proceeded in a northernly direction through and past the group.

The larger object appeared gold in color and was basically spherical, travelled at a constant speed and did not change color. Its size was estimated to be roughly 8 times that of a Boeing at the same altitude. The group of smaller objects then followed the larger sphere as they all disappeared behind some high cloud nearer the horizon.

According to the video footage these clouds appear to be at an altitude of roughly 25000' to 30000' feet. There was no visible residue or jet stream and no noise.

The video footage has been examined and upon frame by frame viewing does indicate the presence of at least three objects simultaniously. Some of the zooming is out of focus but there is substantial good footage and this will be further examined using sophisticated digitizing and color enhancement technics both locally and overseas. Investigations into the case will continue and once the video analysis results are obtained, a further News Release will be issued.