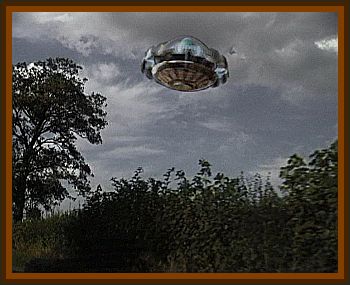 In three months Peter Latucky has counted 360 unidentified flying objects in the sky above his home in the tiny logging town just south of the Canadian border.

Glowing red, white or silver in the night, some were saucer shaped, others triangular, and one was as large as a standard sized motel.

They were hard to miss in an area so remote that even passing planes are rare, Peter said.

At first he was nervous when they flashed their lights as they passed over head, but after a while, he began flashing his lights back.

We’ve gotten so used to it, it’s like your grandparents coming over to the house. It just seems like they are friendly, said Latucky, 46, a disabled jail guard.

Latucky and his family were among 450 people who packed into Yoken’s Convention Center in Portsmouth, NH, earlier this month for the third annual New Hampshire Mutual UFO Network’s third annual UFO conference.

Speakers talked of similarities between structures on Mars and those built by the ancient Egyptians. They discussed the possibility that aliens may be contacting us with increasing frequency to save the earth from pollutants and other threats. They spoke of how the experiences of people abducted by aliens may expand our consciousness of the cosmos.

But for many of those attending, the conference offered more than the latest information on otherworldly phenomena. It gave them a rare opportunity to talk openly about their conviction that life exists elsewhere in the universe without feeling like aliens themselves.

It’s nice to know you’re not the only one who believes in this stuff, said Barbara Weber, 57, a switchboard operator from Wilmot Flat.

The day’s speakers included some of the best known researchers in the field:

Dr. John E. Mack, a Harvard Medical School psychiatrist who works with people who believe they have been abducted by aliens.

Dr. David Jacobs of Temple University, an author who teaches the only regularly scheduled course on UFOs offered at a major university.

The crowd was made up of families, secretaries, therapists, homemakers, retirees, engineers, senior citizens and college students. A few attendees advertised their interest, wearing T-shirts printed with alien faces or ties covered with flying saucers.

They came from as far as Ohio, Connecticut, Rhode Island, New Jersey, New York and Maine. People reveled in the opportunity to hear and tell stories, to show pictures of strange objects in the sky and to exchange book titles.

During a break, a captivated audience gathered around a woman as she described meeting an alien in her house.

Nearby, a woman nodded sympathetically as another wondered whether what she thought was a strange dream was actually an abduction.

There has to be something there, said Karen Kerr, 35, a saleswoman from Ohio who planned her vacation in New Hampshire so she could attend the conference.

She said she has twice awakened in the middle of the night, feeling a presence in her room and seeing a ball filled with colorful geometric shapes floating before her eyes. It is not the kind of experience she can talk about at Saturday night bowling, she said.