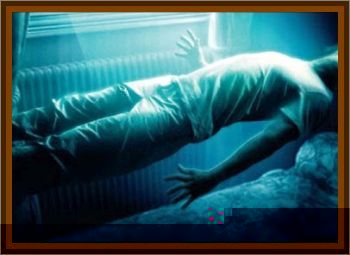 He woke up wide feeling afraid and wide eyed. He then saw 4 creatures leaning over him. He went to reach over to his nightstand to grab his gun but as soon as he moved one the creatures pointed some sort of device at him, he heard a hum and then he could no longer move. He could not even move his eyes. He could see his wife out of the corner of his eye, but it seemed that she was still sleeping.

His next memory was of lying on some sort of gurney. He was naked and the cart was made out of cold metal. The 4 creatures were taking him down some sort of hallway. The walls were dark gray with a scaly type of texture to it. The hallway was lit up, but there were no light fixtures and he could not see the source of the light.

He was no longer paralyzed but his arms and legs appeared to be restrained somehow, but there were no clamps or straps. It was as if they were magnetized to the cart. During the brief trip down this hall, there was an open door way off to his right, he glanced into the room for a second, and was able to get a mental image as to what was in the room.

There were 7 creatures, 2 were standing in front of a panel at the far end of the room. The panel had some small lights on it. Then there were 3 more to the left side of the room studying what appeared to be a holographic map of the earth. There were several red dots on the map. It seemed that they marked certain targets or locations. Then there were 2 more of the creatures standing in the center of the room, facing each other. As if they were having a conversation but there was no sound. There was actually no sound in the structure that he was in. There was complete silence.

They put him in a very bright room, and again he could not see the source of the light. One of the creatures waved his hand over his face. The creature had 3 fingers, resembling 1 index type of finger and opposite thumbs. As soon as his hand went across his face, his body went numb. He was extremely groggy, but he could see what was happening. He could not speak a word.

One of the creatures took a long metal object and inserted it in his nose. A sample was apparently taken then the creature inserted the same device into his mouth, reaching almost to the back of his throat. As soon as he started gagging the creature pulled the device out his mouth. One of the creatures then came towards him with something that resembled a device that measures blood pressure. The device was wrapped around the witness penis. He felt a lot of pressure and after a couple of seconds the device was pulled off. A creature then walked behind his head. His head was lifted up until his chin touched his chest. Then he felt a chunk of his hair pulled out. Soon he felt extremely dizzy and passed out.

His next recollection was of waking up at 4:30 a.m. His penis was sore and appeared larger than normal. He described the creatures as about 4' tall, they wore no apparel, there were no genitalia and their arms and legs were much longer than their torso. They were very skinny, with no muscle tone, no signs of fatty tissue, no veins and no bone structure showing through their skin. Their skin was a blue gray color, almost like a gunmetal color. Very smooth, almost like they were made out of porcelain. Their heads were longer than wide, oval shaped, large black eyes, no retinas, veins or corneas. There was no hair on their bodies. They did not have ears. There were 3 small holes on each side of their heads. They had 2 oval openings above the mouth. Their mouths were like a slit 2" long, horizontal.